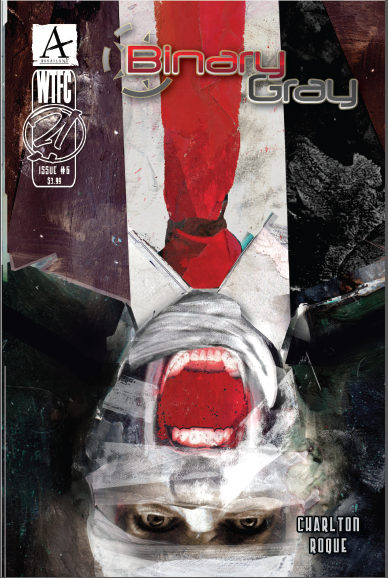 Last November, I presented a review of Binary Gray #5 ,which can be seen at http://the-hammond-comics-blog.blogspot.com/2013/11/review-binary-gray-5.html.  The sixth installment of this series is due to be available on February 1, and I have to admit that it the most exciting one so far. Chris Charlton and Rowel Roque have really outdone themselves in this issue.

Issue six picks up almost where the last one ended with Alex Gray in the headquarters of the hero group, Virtue.  The book gets exciting quickly as the Agency's lackeys attack the facility.  The action in this issue is far better than in issue five, and it is delivered like a full set of one-two punches. What you are not expecting is the sucker punch at the end.  We are left with two cliff hangers.

Chris Charlton brought us an awesome concept of a villain named Sleet in the fifth issue, and he delivers another in this issue.  Tao is a villain working for the the Agency and is the combined bodies and minds of two people. He also seems to have an array of energy attacks.  The design and presentation of this new bad ass is fantastic. I wish there was a bio of it at the end of the comic, in addition to the bio of Dash.

Alex Gray is quickly becoming one of my favorite characters in comicdom.  Mr. Charlton has done an excellent job in delivering this character to us and developing him.  As stated before, Alex's father was killed as a bystander in a battle between the Cross and Scaldron.  In this next issue we are given another piece to the puzzle along with a new question.  Alex's powers also produce a shocking new feature.

What attracts me to a character like Alex Gray is three things:  realism, complexity, and vulnerability.  We should feel as though we could go somewhere and find this person or someone just like them.  Lets face it, no one's life is simple.  There are all sorts of dramatic conflicts, traumatic events, joyous occasions, and other events that happen in everyone's life (just look at Facebook).  Most importantly everyone I have ever met is vulnerable.  Some more than others, but that is a big part of being a person.  All three of these are woven together in Alex Gray.

The artwork in issue six looks more vibrant than in the previous issues.  The colors used and the contrasts really pop out at you.  My favorite work in on page 23.  A purple hue is used to really focus the attention of the panel to the action.  Also on the last page, the blending of yellow into the scene for the sun light is absolutely beautiful (shown below).  Overall the artwork is really well done. The cover, done by David Hollenbach, is just awesome and a little chilling.  I am sure you seen it at the start of this article, but take a moment to go back and really look at it.  Look right into the eyes of the guy.  Did you feel yourself pull back just a little bit.  I know I did.  I have said it before.  Hollenbach has a very unique style to his work, and you can not just look at it.  You have to look it over and really let it live in your eyes.

If any of you are not reading this series, you should give it a read.  It is an exceptional series from a small local company, Assailant Comics (assailantcomics.com).  I do not devote myself to much of anything easily, but after the sixth issue of Binary Gray, my devotion has been earned
Posted by The Hammond Comics Blog at 1:52 AM