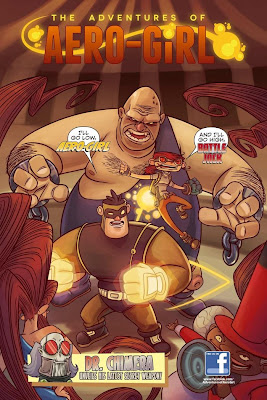 Opinions on crowd-sourcing to get comics published run the gamut, from luminary creators poo-pooing Kickstarter to other names in the business using it to launch their own creator owned projects. I can't speak for all of the feature writers here at The Hammond Comics Blog, but personally I think it's a great avenue for industry unknowns to get a book out there to the masses.
Consequently when a book comes across my Kickstarter radar that seems to have a solid premise and creative team, I'll usually give it a go.


Thus my introduction to The Adventures of Aero-Girl.
Granted, the elements touted in the pitch were right up my alley. It had a Pulpy, almost Atomic Age feel. It had goggles and jetpacks and a gorilla.
There needs to be more of all these things in comics.
So I tossed in my dollars and received a neat new comic in trade.
The Adventures of Aero-Girl tells the tale of young Jacqueline MacKenzie, a superhero aspirant who is a sidekick-in-training under the super hero Battle Jack.
Battle Jack is the protector of the fictional city of Foxbay, possessor of a power called the Battle Spirit, and Jacqueline's father.
Feenstra writes the father/daughter dynamic rather well, balancing elements of doting parenthood, good natured chastising, and lighthearted action without being sappy or preachy.
Battle Jack and Aero-Girl fight their way through foes that are generously sprinkled with Golden Age sentiment, such as the Three Ring Gang (that includes amongst their number a bearded lady with prehensile beard hair) and Dr. Chimera, a madman with a penchant for genetic splicing.
Sadly, we are treated with a sparse appearance of Jak-Jak the superpowered gorilla, but the tease is worth it.
Axur Eneas' art is superb. Crisp and animated without looking too cartoonish, Eneas crafts a detailed vision of Foxbay and its inhabitants, both fair and foul. The stylized art has a look that would transfer well to traditionally animated media. As a bonus, the last few pages of the book had some concept art/character designs and fan art.
In a market bogged down with Flashpoints and Ultrons and enough angst and pathos to make 1995 envious, it's refreshing to read an all ages book that doesn't carry any continuity baggage or editorial micromanaging. The major publishers should take note of books like The Adventures of Aero-Girl, and follow suit. The only complaint I could even muster about this book is that it's too darn short. I wasn't ready for the last page, hoping instead the book would sprout another ten pages or so.
I settled instead for re-reading it another couple of times.
I'll be looking forward to the next three installments of this book, and with any luck it'll find it's way into a collected edition at some point.
Keep an eye on this one, folks. I've got a feeling it's going places.
Posted by The Hammond Comics Blog at 7:30 PM