REVIEW: The True Lives of the Fabulous Killjoys #3 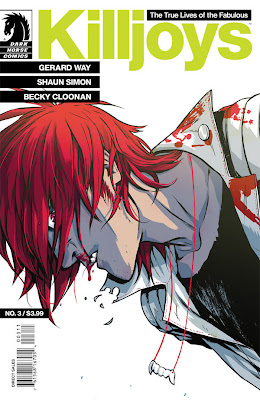 All three of these books were excruciatingly painful to read, but all of them were beautifully drawn. My initial plan was to wait until the series conclusion next month and then dissect the completed series, but I won't be reading issue four. The plotting, pacing, and writing all made reading these books the equivalent of taking the worst tasting medicine ever. After finishing issue three I came to some pretty definitive conclusions about The True Lives of the Fabulous Killjoys, and even the medium of comics themselves.

I consider myself a reasonably intelligent person, and with one book left I have absolutely no clue what is happening in the story. The immense scope of the book is staggering, and instead of developing a few characters while introducing and resolving a quantifiable conflict, The True Lives of the Fabulous Killjoys meanders around in confusion while pummeling the reader with an endless cast of generic, dystopian cliches. The third issue focused around a new and completely different character that might be the fiftieth introduced in three issues.  "Porno bot" is a blue haired...porno bot (?) who attempts to escape a corporate controlled city that is trying to eradicate individualism.

From what I can tell the story is centered around a group of exiles that have escaped this metropolis called Battery City, and the writers are attempting to force feed them all as many rebellious American ideals as possible (think Occupy movement). The title "Rage Against the Machine" would have been more apropos for the following reasons. None of these themes are executed well, and the comic itself reads like emo music that made so much sense at the age of sixteen, but is now an embarrassingly painful bi-product of adolescence.

The art itself was pretty polished; and the only reason that I made it through sixty six pages of this miniseries. Becky Cloonan on a different, well written book might make for a good comic. While the previous false ad that I described in the last paragraph was sophomoric at best in content, it was a well detailed effort artistically. The backgrounds were visually appealing, and the characters were well drawn.

This series is a fairly traditional, uninspired tale themed on the destructive aspects of capitalism and corporate greed. If it was trying to be deliberately disorienting or bizarre it might have been a better read. Instead, it is destined for the dollar bin at your LCS, or will be coming soon to a "50 Random Indie Comic Lot" on EBAY. Please listen to me when I tell you not to buy this book. There are so many wonderful things about comics, and this series embodies almost none of them. Honestly, I hate being this negative about someone's work, but The True Lives of the Fabulous Killjoys is the most mind-numbingly terrible thing that I have read in years.

Posted by The Hammond Comics Blog at 7:05 PM