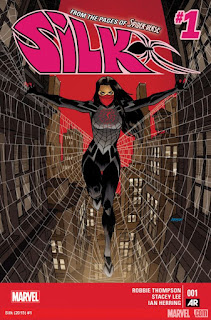 So like every other Spider-Man fanboy I was pretty happy when Marvel announced this book. The powers-that-be at Marvel did a really good job getting me all hot and bothered for the “bastard sister” (no relation) of one Peter Benjamin Parker. Whoa, take it down a notch there Mr. or Mrs. QuickToJudge, Miles Warren has nothing to do with this one. I sure as hell hope not anyway because I don’t think I could survive another trek through the rolling hills of Ben Rileys, test tubes, smokestacks, and holographic foil covers.

Cindy Moon (a.k.a. Silk) happened to be bitten by the same spider that bit Peter Parker on that fateful day way back in August 1962 circa 2015. Sure. Why not? In my opinion it’s a great idea. Just when you think they had milked the Spider of all his sweet, sweet juices, Marvel blindsides you with a one-two donkey punch haymaker combo to the humble beginnings.

Silk voluntarily hid herself from Morlun and his family, the Inheritors, in a secret bunker for like 10 years or something like that, so they wouldn’t be drawn to Earth 616. It seems that these Inheritor whack-jobs are traveling through the multiverse sucking the life forces out of every version of Spider-Man. She leaves the bunker and births this mundane mega event Spiderverse.

I was not happy with Spiderverse as a whole.

I quickly got bored and stopped caring in general. If you didn’t read it, I would stress by any means just catch the highlights on the interwebs and call it good.

I think Thompson’s first issue was pretty darn good. He delivers a small scrap with Dragonclaw, who isn’t all that but you have to start somewhere. Most of the book deals with Silk’s struggle to find her place and purpose during the dawn of her “new” life in the world outside her secluded bunker. Thompson’s skillful use of Silk’s inner monologue really helped to drive the story and pull some heart strings all at once.

I can’t say anything bad about the art either. It didn’t make me weep uncontrollable tears of joy, but I wasn’t weeping in sadness either. I’d recommend giving this book a second thought if you get the chance.

I mean, after all it still has that new hero smell.

Posted by The Hammond Comics Blog at 10:52 AM