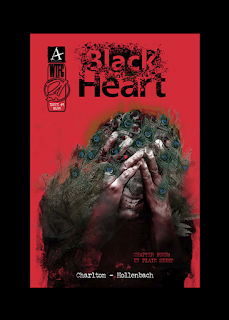 On March 28th at the Gem City Comic Con in Dayton, Ohio, the attendees will be witness to the unveiling of four new issues from Assailant Comics. One of these issues is Black of Heart #4, which is the next to last issue of the award winning series. This series recently won First Prize for the 2014 Space Award and offers a great main character, well developed plot, and unique, powerful artwork.

In the last issue Detective Drake Harper was suffering from hallucinations after going to a dentist, who is revealed to possibly be the killer. These hallucinations hinder him as he prepares to take on Lucky Luciano along with the rest of the department. The investigation has shown that Lucky has been importing narcotics in large quantities, and they are going in force to stop it.

On top of the hallucinations Drake is trying to deal with the disappearance of his love, Patty. What is this man supposed to do?!

I really wish I could say.

Drake Harper is the kind of character we can get behind. He strikes me as a cross between Dick Tracy and Jim Gordon. He has been on the trail of “The Vulture”, but he is oblivious to how close he is. This issue ends with him about to open the door. Believe me. This is no spoiler. The last issue will be the showdown with the evil killer known as “The Vulture”.

Once again I have to give praise to David Hollenbach for his awesome and unique artwork. The cover alone is striking but I would have to say the best panel is on page 6. It depicts Drakes face with a portion shown in x-ray, revealing the tooth causing his hallucinations. The detail and feeling in this image really need no words. It tells a story all on its own.

It is easy to see why this series is winning awards. CSI, Criminal Minds, and other crime drama fans should be on board with this comic book. Chris Charlton has a true masterpiece on his hands with this work. I can’t wait for the finale but I will be sad when it is over. 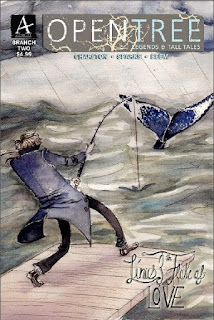 The very first thing about “Linus and the Fluke of Love” that is noticeable is the artistry. Lauren Sparks has a stupendous talent with water colors. The comic book is just plain GORGEOUS! Page 21 can barely contain the picture of a whale exploding out of the water. The details she uses in addition to her shading ability is truly captivating. 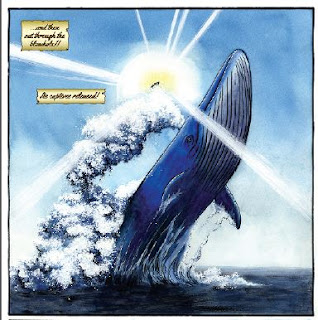 “Linus and the Fluke of Love” is a poem Chris Charlton has composed to tell the story of the heartbroken Linus. He was rejected by his love and three years later was swallowed by a giant whale. While in the belly of the whale, he meets and falls in love with Hanna (yep, she was swallowed too). This whale has a serious appetite for humans.
Look out, Jaws!

This story is quite touching, but it does not top Open Tree #1. It is a great read though and will make you smile. My 8-year-old daughter read it and did not quite get it at first. I think the poetic tone of the text threw her off. She loved the pictures and has tried to recreate them herself.

She is a bit off from Lauren’s work.

This issue is a good follow up to the first. It has a nice, pleasant, and uplifting tone that we all need from time to time. Navigate to Assailant’s site and get a digital copy to check out for yourself.
Posted by The Hammond Comics Blog at 10:55 AM