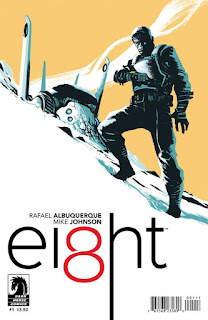 My pull list is barren of Dark Horse Comics, mainly because the comics they produce are natural satellites of planet suck. This past week there must have been some strange eclipse of the sun or some kind of disaster that knocked one of the newest satellites into space. Ei8ht was found at my LCBS on a shelf. Even though the cover is not very attractive, I opened it and flipped through it.

Two things made me purchase this book. The first is the artwork. It was very unique looking using a lot of blue. The second was the inside of the front cover, which contained the following code:

“The past is Green.
The present is Purple.
The future is Blue.
The Meld is something else entirely.” (last line in yellow)

This made me think 'time travel science fiction written in crayon'.

Rafael Albuquerque and Mike Johnson have done a great job with setting a shark sized hook. This story is centered on the time traveler, Joshua, who is sent back to find a man with a star-shaped scar. After traveling back, Joshua has some memory issues, but is found by some savage looking people who introduce him to the Meld.

We are left holding a large bag with little in it. We know hardly anything about Joshua or the one holding him. Joshua’s mission is vague at best with us just knowing who Joshua is after. So where is the hook you ask? That is a damned good question. I am not sure where it is, but I swallowed it and need to read the next one. If you ask me, that is some good story telling.

The artwork is uniquely fantastic. Albuquerque’s inking and drawing is great. His lines are clean and deliberate. The scenes are all done with in white and blues with the sky and other items featuring the color of the time-line. Hari and Nali are a pair of sisters that are drawn very well. I particularly like the shape of their heads in relation to their eyes.

Although Dark Horse is a stop in the ghetto; don’t forget to make the left turn at Albuquerque and check Ei8ht out. I am going to have to read at least 3-4 more issues to know if this is going somewhere, but it is already off to a good start. 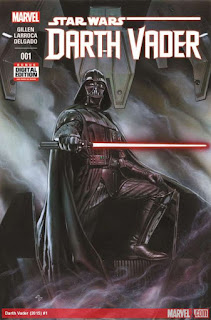 Marvel’s breakout in the Star Wars scene deserves some attention. Last month we witnessed the dawning of a new age in Star Wars comic books. Until then Dark Horse has been presenting us with some half-assed scatter-plotted crap.

With three books out (Star Wars #1 and #2, and Darth Vader #1), Marvel is aiming for another galaxy far, far away (ha ha! . . . a pun!). They are batting .500 and in my opinion all three of these are well on their way out of our galactic neighborhood.

My only fear is that the Marvel machine will take this awesome start, spread it out over five to ten different books to try and maximize revenue. I can understand a few books to broaden the plot view, but I can’t stand having to spend $50 a month to know what is happening. That is why I don’t read Avengers or X-men any more. TOO MANY TITLES EACH MONTH!!!

I love Star Wars, and these books are the best. If you like the movies, get them if you have not already. They pick up right after Episode IV: A New Hope.