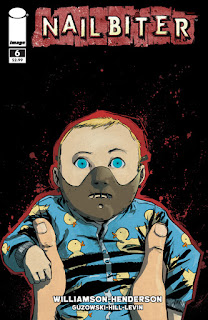 Earlier this year, Image started publishing a captivating series called Nailbiter. The title struck me as completely laughable, but the cover art was so sinister (pictured below). Since starting the series, it has become one of my most anticipated comics on my pull list.

Why did Friday the 13th, Halloween, Silence of the Lambs, Seven, and Saw do so well? They all involved highly motivated serial killers. Why do these types of characters and story lines appeal to the masses? It can be summed up in one simple word.

Drive.
A serial killer is quite simply the top of apex predators. An apex predator is a creature that has no natural predators and exists at the top of its food chain. For the most part serial killers do not eat their victims but do hunt, stalk, and consume them. The consumption gained is the result of the drive to murder. This can be in the form of sex, thrill, control, or any other form of gratification.

In the world of fiction, serial killers are a great, recyclable machine for terror. They are also a great platform to build awesome heroes and protagonists out of mediocre ones. That brings us to Nailbiter. 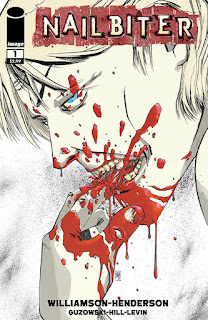 When the story started, FBI agent Eliot Carroll disappeared after figuring out that 16 of the country’s worst serial killers, including Edward “Nailbiter” Warren, were from one single town, Buckaroo, Oregon. Agent Carroll’s disappearance causes his friend Nicholas Finch from the NSA to come and figure out what happened with the local Sheriff Shannon Crane. Ironically they have to enlist Warren to help find Carroll. Since that first issue the story has been a roller coaster ride of a thriller.

In Nailbiter #6, the story switches gears into its next arc. By the sound of this issue we are going to get a taste of Buckaroo’s culture. At the beginning of the issue Alice (I think she is the niece of the Sheriff, but I am too lazy at the moment to go pull the last issue) is sitting in a diner when a new character comes onto the scene, Mallory. Mallory is a serial killer fanatic and wants her baby which is about to crown to be born in Buckaroo. She thinks, if the child is born in this town, the child will be a serial killer and make her famous. I absolutely will not share any more than that about this issue. You've got to admit that is just a creepy and weird way to start the issue and have to find out more, right?

Williamson has done a superb job at creating this story. He is continually building suspense while delivering gore and violence in a meaningful way. Gore has never bothered me unless it is pointless. There is nothing worse than gore that is overly done. Williamson uses developed characters, a dynamic setting, and a solid plot to build an absolutely sexy story.

Mike Henderson and Adam Guzowski combine their talents blast this story at us. Their work is good but not great. What I like about their work is how they use color and deliberate lines to project certain scenes right at you. For instance in the current issue on page 8, they deliver a doctor screaming as a large syringe needle is thrust through one cheek, the tongue, and out the other cheek. The image really pops out as you turn the page. The placement and delivery is absolutely brilliant. In my opinion, even though their skill is less than that of other artists, Henderson and Guzowski know how to use what they have and make it worth more than it is.

Check the series out. It is worth it. The trade collecting the first five issues will be out soon, and issue seven is promising a special guest. That special guest is Brian Michael Bendis. Hell, if Bendis is stepping over to have his name in it, it has to be worth something.
Posted by The Hammond Comics Blog at 10:09 AM