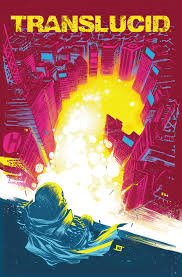 Sometimes my coffee table regurgitates random things from time to time. That is the very circumstance in which we now find ourselves.
I found this book sandwiched between issue #3 and #4 of the David Hine Spider-Man Noir books that I had dug out of the amoeba with the intention of rereading an old favorite. Unfortunately my coffee table had other plans and into the void they went . . . until today.

I have no idea where this Translucid book came from. I don’t remember buying it. I don’t remember reading it, in fact I don’t think I've ever laid mortal eyes on this book before.
Ever.
I’m fairly certain that, if I had, I’d remember, because the cover is so ugly it hurts my eye holes. It’s Gottawful. It’s like drinking Wild Turkey from a fire hose, up the nostril, and that’s the Gottdamn truth. Today my coffee table puked up ugly. It happens from time to time. 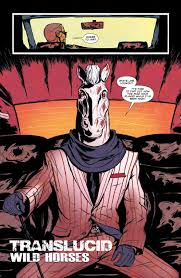 Well, there’s more to the story. I was so happy that the first page and all the pages thereafter were not a reflection of the aforementioned fail of a cover. The pain in my eyes subsided and morbid reckless curiosity consumed me, so I bought the ticket.
It didn’t take long and I was totally and hopelessly lost. First we see a kid drawing a prototype for some suit of armor or the like, then suddenly we’re thrown into the world of “Horse Guy”, a villain who thinks wearing a giant white horse head mask is a super-awesome badass thing for a villain to do, and The Navigator, our hero who apparently is either:


-Too lazy to do the hero thing anymore


First, in as few words as possible:

The ass with the horse head tricks Navigator into thinking some other bad guys tied him up, rigged him to a bomb, and put him in the basement of the Empire State building. The hero goes to save his archenemy only for that bastard horses ass to sneak attack the hero with a quick jab to the neck with a syringe loaded with LSD.
Instantly I was blinded.
The damn comic turns into a black neon light wonderland of three eyed guys in horse head masks and other things you can only see while under the influence of mind altering substances or perhaps mid-coitus. It got neon . . . way, way neon.
Turn the page and we’re back to the little kid again. This time he’s just waking up from a nightmare, leading me to think that all this is going on inside the kids imagination or his dreams. Either way, unless issues #2-5 somehow find themselves into a dollar box I cross paths with, I doubt I’ll ever find out what transpired in the lives of The Navigator and the guy in the horse head mask.
Some things are better left within the dark void under my coffee table. Now the only thing left to do is lick page 19 and get on the Gottdamn day-glow bus headed to NYC.
Posted by The Hammond Comics Blog at 10:12 AM