Review: I Was the Cat 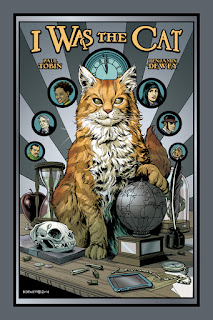 I'm a cat person.
My family is cat people.
Nothing really against dogs, I just prefer cats. They're like a semi-ambulatory appliance or a piece of furniture.
A hassock, probably . . .

Anyway, cat people have a tendency to habitually anthropomorphize their pets, accrediting them with spades more intelligence than should be allotted.
Myself, not so much. My cats are generally as smart as a sack full of doorknobs.
Paul Tobin's fictional talking cat, Burma, on the other hand, is taking over the world with his intelligence.

I Was the Cat spins the story of Burma, the titular cat, and his nine lives. Lives he's spent attempting to conquer the globe. From ancient Egypt to the trenches of WW1 and into the modern era, Burma has been pulling strings and manipulating players like Napoleon Bonaparte and Mary, Queen of Scots in his bid for domination. Chronicling his exploits for a memoir is Allison Breaking, a gutsy reporter in the tradition of gutsy women journalists. Allison is accompanied by her plucky friend Reggie, who treads water dangerously close to the Manic Pixie Dream Girl trope, but nevertheless serve as an engaging foil to Allison as the pair record Burma's exploits whilst slowly uncovering his plans for ruling the world.

Paul Tobin and artist Benjamin Dewey spin an engaging and incredibly entertaining tale in the pages of I Was the Cat. Certainly not pretentious or full of itself, and somewhat tongue-in-cheek at points, the books 186 pages (plus a couple of extras) are a quick, enjoyable read made all the better by Dewey's art which is detail minded but careful not to overcrowd the panels. The cover is especially engaging and well done, and it certainly is what drew my attention at the time of solicit. The inks and colors are a hair thick and muddy (respectively) at times, but certainly not enough to detract enjoyment from the almost watercolor look of the book. The color palette in daylight scenes is especially pleasing and contrast well with Burma's flashbacks which are primarily monotone in color.

I Was the Cat is a smaller (6"x9", roughly), beautifully bound hardcover available from Oni Press. The price point may give some readers pause at $24.99, USD, but it's well worth the price of admission.
Trim a few books from the Big 2 you'd otherwise buy this month and pick up I Was the Cat instead.

Let's be honest. You don't really care about "Futures End" or the "Death of Wolverine" anyway . . .
Posted by The Hammond Comics Blog at 10:07 AM