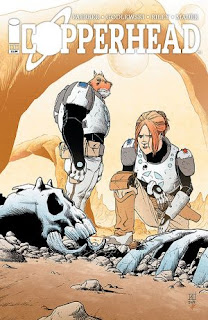 There it is! That 'holy shit' moment where you lose control of your bladder and most of your motor functions . . . where you’re like, "F me, I’m sitting here feeling like I bathed in Novocain and a tiny bit of my own urine but you know what? It’s perfectly fine because that was a Gottdamn great comic".

Reading Copperhead is like touching boobs for the first time . . . Mind-blowing. Bags of sand.

Seriously though I’m not even kidding. Not even a little bit. Zero, kids.
I’d go as far as to say right now, one review into the HCB’s new calendar year, that Copperhead is the comic of the year. I know its only the first issue but that doesn’t matter to me because it’s that good.
I’ve been a Jay Faerber fan ever since I read his Near Death, another great book. To be totally honest I kind of forgot about the chap until I picked up Copperhead. It won’t happen again.

So let’s talk turkey. We’re thrown into the dirty alien streets of Copperhead, a corrupt mining town on some far-off planet. We’ve got various alien characters running by, from bright pink hammerhead shark-looking dudes to multi-limbed bright green Jabba the Hutt- lookin hillbilly white trash. It’s like Chalmun's Cantina on Mos Eisley minus all the Jawas kinda vibe.
Copperhead is in need of a new Sheriff ( with two f’s ) and Clara Bronson is just the badass chick for the job. Not to say we get a lot of info in regards to Clara except she has a son named Zeke and, like I said before, she’s a badass.
I can see fans of Firefly getting into this one. It’s the wild west in space . . . with aliens and stuff.

Jay Faerber isn’t the only one holding all aces here either. Godlewski and Riley have the purdy scribbles covered. I couldn’t find fault here if I tried. Ron Riley has worked with Jay Faerber on other works, including Near Death. Riley does a real damn good job of adding the western desert feel to Scott’s artwork with his fantastic colors and texturing.
This is going to be the longest month of my life, waiting for the second issue.
Comic of the year.

Zero, kids. Remember when you didn’t buy the first issue of TWD?

Don’t be an idiot twice.
Posted by The Hammond Comics Blog at 12:00 PM