"I hate you. I hate you. I don't even know you and I hate your guts. I hope all of the bad things in life happen to you and nobody else but you." -Silky Johnson 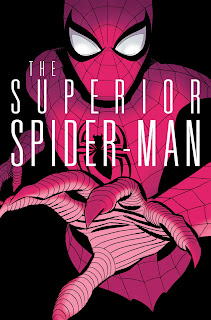 This used to be my opinion of Spider-Man. Madman and I have had many back and forths regarding the web crawler in our time together on this website. He told me to read Scarlet Spider #1 and it made me want to cut myself. On Wednesdays I used to have this ritual where I would pick up my comics and head to the bar straight away for some microbrews. After reading my copy of Scarlet Spider #1 I immediately gave it to resident barfly and comic fan Cool Uncle Stu Balls. A week later he tried to give it back. I'm pretty sure it ended up going into the trash.

Peter Parker Spidey was almost as bad. I found the endless one liners and puns cliche' and exhausting. While Spider-Man does boast one of the best rogues galleries in comics, this book had nothing else to offer me. I put it down when I was eleven years old. These days I don't get into supe books much. As a young fanboy I was always surrounded by stacks of DC comics, but now read a couple of books from every new title that comes out just to keep current and have a valid, informed opinion. The worst comic is still better than the best episode of Ashton Kutcher Two and a Half Men anyway, right?

I was as surprised as anyone to discover that at the moment, three of the books that I really look forward to each month are supe books. Two of those books are Marvel Now titles. FF is incredible. There is not enough room here to polish that gem, so it's going to have to wait until next month for a proper review. The other book that I absolutely love from Marvel is Superior Spider-Man.

This was a book that I really wanted to hate. Dan Slott wins the "All-Time Biggest Douche on Twitter Ever" award. This guy is a huge dick, bashing Kickstarter and just being an all around arrogant taint on the interwebs. But I must give credit where credit is due. He took everything that I hated about Spider-Man, tore it out, and placed the mind of Doctor Octopus in Peter Parker's body. The results are brilliant. My only lingering issue with the title was Peter Parker's ghost inhabiting his own subconscious. As of issue nine Jiminy Cricket is now gone for good and an already great book is even better. Everything about this new Spidey title is superior. And while Spider-Man purists bash this book in comic forums on the daily, it is top shelf all of the way.

Ryan Stegman has done an incredible job with the art in every issue, and the clarity that his work brings to Superior Spider-Man is truly impressive. Some of the panels are mind blowingly dense, and his art elevates this title into the upper echelon. SpOck is my favorite superhero out right now (stands and claps) and this is a a great read even for people who prefer indie comics. Keep it up gentlemen.

This issue is a perfect place to start if you're not current with Superior Spider-Man. A new arc has begun in #10, and Spidey villains everywhere are trying to find new ways to adapt to a friendly neighborhood Spider-Man that will punch you in the throat or shoot you in the head at point blank range. We all know Peter Parker will back back at some point, but SpOck needs to stay around as long as possible. To quote Silky Johnson a final time, Peter Parker Spider-Man is a woman who wears underwear "with dick holes in 'em".

Posted by The Hammond Comics Blog at 8:31 PM