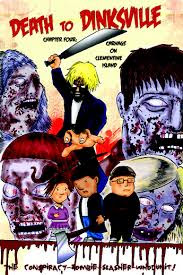 In case you haven’t read the first three chapters: Lamar, Ellen, and the Cheney Corporation. Let’s recap to bring you up to speed:

Lamar is a tough little bastard, that’s basically all you need to know, but I guess I’ll elaborate a wee bit more. Lamar has been dealt a pretty shitty hand. His mama is a whore, who apparently is attracted to the worst kind of guys. The current jackass kicks Lamar’s ass and he bails for the safety of his best friend Shogo’s house. Lamar spends the night there and his life is good…until breakfast. A zombie comes through the front door and bites Shogo’s mother. Shogo does not freak out at the sight of the walking undead tearing his mother’s throat out.

Shogo goes all Chucky and destroys the zombie with a few dozen well-placed pokes with a rather large butcher knife. But, as it may be, the joke is on poor Shogo. His newly reanimated zombie mom takes a large nibble out of his neck. As if a zombie uprising wasn’t enough for Dinksville, we learn that Dylan Haddenfield, a murdering psychopath, has escaped prison.
In chapter two, Tungol gives us Ellen. Ellen is another grade school bad ass. Ellen’s bike may still have training wheels, but she is a beast with her Glock 9mm. Pow ! Right between the dead, lifeless eyes every time. Ellen meets up with Lamar and Shogo. Haddenfield’s unholy crusade continues and the zombies do what zombies do. Enter the evil Cheney Corporation.

Chapter three introduces us to a second cloaked psychopath looking for the secret of Virus Z (the zombie maker virus), and in a great few pages Lamar is forced to put his freshly turned mother down.

In the newly released chapter four, we get a flashback that explains Haddenfield’s not so humble beginnings as a serial killer.

It’s also revealed that Shogo’s DNA may be humanities only hope.

Each of these books entertained me from cover to cover. I know! More zombies. But even though it has the current trend of the “zombie virus” within its folds, Death to Dinksville is so much more than just another biter tale.

I read all four chapters back to back in no time. The books are a quick read with a maximum fun rating.

The art is really fun as well. Imagine Charlie Brown crossed with the Walking Dead and a hint of one of those Scream movies thrown in with a Chucky kind of feel to it (for no other reason than the little kids with butcher knives and axes).

One thing I don’t get is the fact that everyone in the comic only has four fingers and it really freaks me the hell out.

After each chapter, I couldn’t stop reading and just had to read the next issue. Take my word on this and head over to Jtungol.com and order all four issues as soon as possible.He has my wallet for all 13 issues...fact.

PS Thank You to Mr. Tungol for shipping the first four issues directly to my door. You truly have a comic worth supporting.

Posted by The Hammond Comics Blog at 5:02 PM