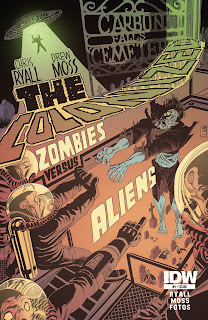 I haven't decided if I'm a fan of genre cross breeding or not, and I'm not exactly waiting with bated breath for the next zombie pop-culture phenomenon, buuuuuut...

Little green men versus zombies kinda piqued the ol' curiosity. Also curious was the fact that this book was published by IDW and wasn't a licensed property, but I digress...

Colonized: A Tale of Zombies vs. Aliens is a fairly fun read, kids. In the wide open Montana country we find a flying saucer on a mission to snatch up indigenous Earth-life, probably with the intent of probing it. After zooming over a cemetery, the saucer tractor-beams up a zombie and we're off to the races.

Taking a page from the Alien vs. Predator playbook we have a crop of hapless humans caught in the middle, which is good, because you need relatable fodder in any genre piece like this. This particular fodder comes from a commune/militia headquarters in the Montana wilds that seems to be torn betwixt those who want to go green and live off the grid and those paranoiacs who want to stockpile arms in case The Man comes to take away their rights.

There's some disputes amongst the human fodder about leadership policies and an attempt to develop some endearing characters, but let's not church this up too much, folks.

If I want a comic about endearing human drama and the triumph of will over insurmountable odds, I'll read Strangers In Paradise.

In any case, a loose zombie aboard a flying saucer soon leads to a crashing saucer and alien, zombie and human meet at last.

A hint of detente between aliens and humans against a common foe in later issues is given, probably with the gun-nut faction opposing a team up with aliens.
Which may or may not be an immigration metaphor.
I'm guessing the redneck in charge of the militant faction does something foolish and gets some folks killed...

Speculation aside, Colonized was a decent book. Some familiar tropes bound through the book, and plot points seem to be telegraphed if you're any sort of well-read man or woman, but what the hell. I feel like I got my money's worth and will stick it out at least long enough to see if my predictions are correct.

The writing had some pretty good substance to it, giving some character to the aliens but relegating the human protagonists to fairly 2-dimensional archetypes.
But, if they're going to get eaten by zombies anyway, who cares?
They don't all have to be as in-depth as The Walking Dead, guys...

Ryall is treading familiar water with this book, having scribed Zombies vs. Robots... Vs Amazons, so zombies vs. aliens vs. hippies vs. rednecks should flow easily from his pen.
As long as I get alien zombies in this book I'll be happy.
And maybe a death ray or 2...

Drew Moss' art may be the shining point in the book. The designs are great, and he's not afraid to embrace the familiar. The alien saucer is just that, an archetypical flying saucer, and the aliens are little green men with jumpsuits and big lumpy heads. They even have bubble helmets.

The humans, undead or not, are well drawn and he has a good eye for background and environment.

The Colonized doesn't come out of the gate swinging hard, but I trust Chris Ryall is taking his time to build the story and gather some steam for an alien/zombie/militiaman throwdown. I don't know if The Colonized will have the staying power of some other contemporary zombie comics, but I'll stick it out for the duration.
It does dawn on me that Robert Kirkman once said that if Walking Dead ever made it to issue 75 (if memory serves) the book would be in color and he'd throw aliens into the comic...

The Colonized is a full color zombie/alien book available from IDW for the price of $3.99 with a cover by Dave Sim of Cerebus fame.

Posted by The Hammond Comics Blog at 6:11 PM