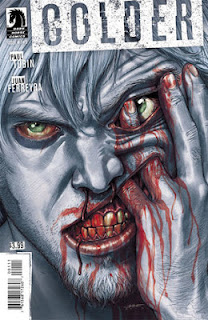 I’d never heard a thing about it. I was making my way down the wall towards the “A” section at my local comic book store. I’m sure every fan boy has their own rituals when entering their local holiest of holies. For me, it’s starting at Avengers and ending with the X-Men. So there I was doing my thing….quick Before Watch Men, look away…..then BLAM. POW. There it was…there it was. Possibly the best cover ever to grace the face of any comic….ever. Not the most iconic or the most prized and certainly not the most valuable, but most definitely the creepiest, the most disturbing, and the most deliciously hideous cover art I have been privileged to lay my eyes on. Colder……what the hell is this? Who the hell are Paul Tobin and Juan Ferreyra? I have no idea. Will my wife get upset when I frame this bad puppy and hang it in the living room? But do

Declan Thomas’ body temperature is dropping. He doesn’t get sick and can’t feel pain, which more often than not has to come in handy. Declan is an ex-inmate fresh out of the insane asylum. He has been “gifted” the ability to step inside a person’s madness and sometimes cure it. Declan hopes to one day cure his own, but time is running out because when his body temperature reaches zero…..it’s game over.

Our antagonist, Nimble Jack, is clearly not of this world. As he seems to delight in torturing the mad and eating what’s left of their sanity or perhaps the fear that one oozes when totally off their rocker. At one point our cavorting villain of sorts drags an agoraphobic woman into an internal nightmare full of “people” with giant eyeballs for foreheads……yeah, she commits suicide, but who wouldn’t?

Colder is off to a very solid start presenting a comic that stands out as something truly unique. Tobin had seemingly come up with a story unlike anything he, or many other people have written yet. If you’re into Locke and Key or Preacher, then you’re guaranteed to enjoy this one.
You can’t miss it. It’s the one with the cover of a guy shoving his fingers through his face. But if you’re expecting pure gross-out horror, look elsewhere. Colder is a wonderfully subtle, mysterious, and frequently horrifying journey into the nature of madness. Buy two of each issue…..it’s that tasty.

Posted by The Hammond Comics Blog at 5:48 PM