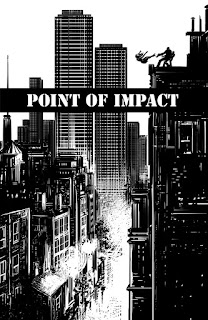 I was pretty upset when I heard that Near Death was cancelled. It was consistently one of my favorite books on the rack. The writing was always right there for me. So I found myself very excited when I heard about the release of Point of Impact. The book has been pretty on point (pun intended) halfway through it's limited issue run. The cover on the first issue sold me on the art right away. Koray Kuranel can definitely draw landscapes well, as is evident throughout his limited body of work. In addition to a quality comic, Faerber brought back Under the Influence, essays that mostly consist of his musings about other works in the crime genre. If you are into crime fiction, there is probably something of interest for you there.

Point of Impact does not suffer from any pacing issues either, giving the reader a steady mix of action and plot development. This one doesn't get bogged down, but can be quite dialogue heavy. That is fine on my end, because I have always felt that Faerber's strength as a writer lies with the well developed characters more than the overall theme. My only criticism so far, is that this one is pretty much a straight up crime book. Let me explain. 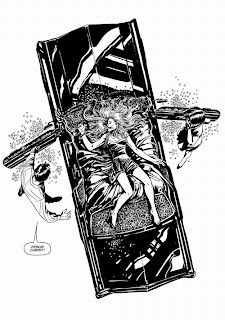 What was so refreshing about books like Saga, and even Dark Horse's Axe Cop, was the originality. I know you really can't lump those books together, but a lot of the stuff I see on the rack these days seems beat to death. Saga is undoubtedly a science fiction comic, but the story and the art elevate it to something completely different even though there have been thousands of science fiction comics on the shelves in the past. Bedlam got great reviews, and for good reason, but I felt that you could have thrown Joker into that book and it would have made one hell of a Batman comic. It's an edgy read, but ultimately does not get it done separating itself from the most mild Garth Ennis book you can find. Now that guy's got some edge. I get why people love the crime genre, but Point of Impact so far suffers from this same genre malaise.

You can't really tear this one to pieces at all. The art is great. The plot and characters work. The dialogue is sharp, but I have read a lot of other crime books that are quite similar. Even the art suffers this same fate. In some of the better crime stories, the city itself almost acts as another character, in this story it is well drawn but pretty generic. This book is well worth the three dollar cover price, but this one isn't breaking any new ground.

This is a much better read than most of the stuff that you're going to find out right now. With books like Point of Impact and Fatale, the crime genre in comics is back in a big way. You go comics. I hope that Image sees the potential in Faerber's writing and signs him on again, because he could be great, and right now he is well above pretty damn good. Koray Kuranel should be around for years to come. That guy can draw. Put your money on the counter with confidence and pick up Point of Impact today.
Posted by The Hammond Comics Blog at 4:01 AM