REVIEW: To Hell You Ride #1 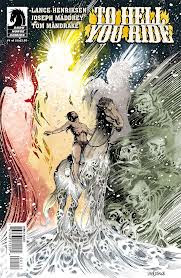 Okay, I totally bought this because Bishop from Aliens wrote it. Or co-wrote it. I usually don't buy in to comics written by actors or musicians because, frankly, most of them are poor actors or musicians and I can only imagine what horror is wrought against the comic industry via Nic Cage's Confused Man or Supermegathrasher by That One Guy From System of A Down. If I want a crap comic I'm sure that Jeph Loeb or Rob Liefeld are more than willing to accommodate. No need for me to outsource into the entertainment industry and subject myself to the plotting of hack actors or guys from glorified garage bands.

Lance Henrikson got a free pass, though. It's based purely on hypocritical favoritism, but go screw.
This is Bishop from Aliens we're talkin' about here. Old Man Harley from Pumpkinhead. Frank from Millennium.
The sheriff from Piranha II...
This guy's been in comic books his entire acting career, for cryin' out loud.

Plus, I think Henrikson is awesome, so I bought his book.

To Hell... opens in 1800s Colorado as prospectors strike gold and a mining camp soon springs up around a Native American burial site, which as we all know never ends well for any of the involved parties. Due to the desecration wrought by the white man, local natives must make a sacrifice to 'appease the spirits and restore balance'. Four native braves fire arrows into the sky, run down into the mining camp, and take their own arrow to the chest as it plummets back to earth. The first two braves are successful, but the miners shoot down the last two and interrupt the ceremony and turn ritual into curse. The four warriors become spirits called Watchers and await the last two arrows to reach the ground, at which point the narrator informs us they will "come for us". So, right away the book falls into a bit of a cliche with ignorant white man despoiling the lands of proud aboriginal people and unleashing Powers He Does Not Understand.

Flash forward to present day, and our protagonist is revealed to be a down on his luck Native American named Seven George, affectionately known as "Two Dogs" to the white man who is, unsurprisingly, trying to keep him down. George lives in a ramshackle farmstead with a few animals and no real means to make a living.
Did I mention George was a down on his luck Indian? Who also drinks and drives a junked out pickup truck?

Checking off the mental stereotype checklist, I continued...
Luckily, my attention was caught by two exploding chickens. That's right. Exploding chickens and a footnote telling you the chemical reaction that caused the explosion (it's CaC2 + H2O = Exploding chicken, according to the text. Note that I in no way, shape, or form condone the practice of chicken combustion. It was pretty sweet to see in a comic book, though...)

Seven George then is off to cut firewood in his junky pickup (which has 'NDNZ' spraypainted on the side...), presumably after cleansing himself of chicken guts. The tree he's cutting explodes after being struck by one of the arrows from the prelude, finally falling back to earth. George retrieves the arrow and sees the Watcher spirit, causing him to hop in his Indian hoopty and flee.

We are then treated to a seemingly out of place interlude of a 1989 incident involving Seven George's grandfather, Five George, and the town sheriff recruiting him to find a dead white girl.
Because, y'know, he's a wizened old Indian, and those guys always have mystical spirit powers and are chock full of folksy old wisdom, and can speak to trees and mountain lions and chickadees.
Stereotypically speaking...

The interlude ends with Five George finding the dead white girl and we are led to believe that he takes the fall for the murder, thus explaining why Seven George may be such a pariah in the community.
The book ends with Seven George drunkenly running his pickup truck into a statue in town square and ending up in the hoosegow, rambling some cryptic dialogue about the black arrowhead protecting him from the curse as one of the Watcher spirits closes in on him in his cell...

Overall this was an enjoyable read as long as the numerous cliches and stereotypes involving Native Americans and Devil White Man don't color your opinion. There wasn't anything particularly insulting, no 'smokum peace pipe' or any shit like that, just played-out tropes that have been around for as long as Natives have been portrayed in media and as long as Ignorant White Man has been desecrating burial grounds. The book has quite a bit of symbolism, mostly involving birds as heralds of ill-fortune and change, and is fairly vague about the curse and its Watchers. This didn't detract from the story, and I almost always prefer books that don't cram exposition down your throat. This'll keep you guessing and, from a marketing standpoint, will hopefully keep you buying the book.

The art was very good, invoking the black and white horror magazines of yesteryear in the style, albeit To Hell... is in color and Chris Peter and Mat Lopes do a phenomenal job in that department.

I don't know that we've got a blockbuster on our hands with Lance Henrikson's To Hell You Ride, but this modern day Weird West story piqued my curiosity enough to stick with it for now. There's still plenty of opportunity to jump the shark on this one, but if I could make it through Piranha II with Lance, I can make it through To Hell... with him.
The exploding chickens didn't hurt, either...
Posted by The Hammond Comics Blog at 3:51 AM