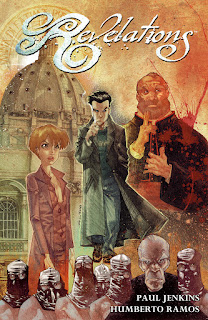 A couple of weeks ago when I stopped into Comic Cubed (Kokomo, Indiana), only two comics perched waiting for me in my subscription folder. Wanting more to read over the next week, I began to scan the wall of the current issues. Happily my stomach was empty, for the Marvel covers and titles made me retch. Seriously how wasted was the guy, whom first uttered “Battleworld”. Anyway, not finding anything to excite my eyeballs, I began looking at the trades and graphic novels. Seeing a few interesting ones, particularly Locke and Key, Shawn Hilton (Comic Cubed owner) suggested the trade paperback of the mini-series Revelations from BOOM! Studios. My skepticism was high as the story was based on the Catholic religion. Though I am not Catholic, I am a Christian and tend to stay away from comics that deal with the subject as I am not sure of their views on Christianity. It’s just my outlook.

Fortunately, I gave it a chance and was pleasantly surprised by it. Paul Jenkins delivers a very powerful mystery that baffles your intellect until the end. The story structure is sound and flows so well. This is difficult in such an endeavor, as most of the murder mystery comics I have seen or read have more information than they need or go out of their way to mislead the reader. Jenkins weaves an awesome web of mystery, suspense, and intrigue. Let me try to explain this without any spoilers.

First of all the main character is Detective Charlie Northern of Scotland Yard. He introduces himself with the following:

“My name is Charlie Northern. I’m forty-five years old, and I have been a soon-to-be-ex-smoker for thirty years. I’ve tried cough drops, patches, and cold turkey. My love affair with hypnotherapy never got off the ground. I’ve made promises and set dates and even stayed in bed for a week. Believe it or not ladies, I am still single. In life, I work for the flying squad out of Holborn Police Station. I like football and pretty girls and bloody awful yet thoroughly believable books on the unexplained.”

Charlie Northern is one of the most complete characters I have read about recently. The back story of this persistent detective is gradually divulged throughout the series, and he is very likable.

The mystery surrounds the murder of a Cardinal of the Catholic Church in Rome. The intrigue involves the massive cover up of the murder by local police and the other Cardinals. Paul Jenkins is well versed in the use of suspense as he unveils the plot.

As great as all of this sounds, it gets better. The artwork is great. Ramos has a particular style which he uses for the characters. At first I was not sure if I liked it, but as I read it really grew on me. The style is different but very consistent throughout in the series. What truly impresses me are the colors. Leonardo Olea has done all of the colors for the series except for chapter three, which is done by Edgar Delgado and Edgar Clement. What fascinates me is I couldn’t tell the difference between each of their work. The work is phenomenal!

Seriously, this is a series most everyone should read. Whether you like mysteries or not this story will entertain you with its many great facets. Honestly I don’t read much from BOOM!, but this is a jewel. Thank you, Shawn, for the great recommendation.

Posted by The Hammond Comics Blog at 6:16 AM