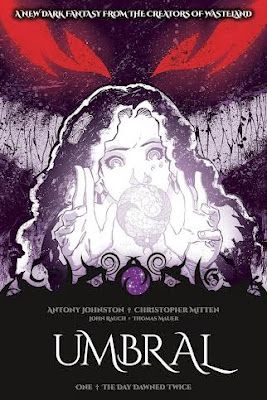 “Don’t judge a book by its cover” is the saying we have all heard throughout our lives, and we usually think of its meaning as ugly or undesirable on the outside.  This meaning can go the other way, and Umbral is a perfect example. The cover is very captivating, but the pages are covered in utter crap. Let’s put on our boots and take a stink walk through it.

This comic starts with the main character, a girl named Rascal, stating that she has fallen into “the Umbral”.  This coupled with the artwork . . . um picture . . . uh page spasm indicates that “the Umbral” to be a place of some kind, but I will get more into that later.

Our next step through the heap brings us to a drawn out conversation between a king and queen. Having tortured myself with reading this book twice, my thought to this conversation is why it is here and what purpose does it serve.  Unfortunately, the answer seems to be either A) to take up space or B) to have something more to draw badly. Truthfully the answer would seem to be both.

On page seven, there is a map of “the Kingdom of Fendin”, which is decently done.  When I was done reading the comic, I was unable to understand why the map was needed.  Having read fantasy and science fiction for most of my life, a map is usually standard when dealing with a story that is going to change settings often to help the reader understand the world. In this comic there is no need to include the map yet, because the story goes from an unidentified place to “the Umbral”, which is not on the map at all.

Once past the map, the crap pile gets deeper. Rascal and Prince Arthir are in a ruin or something having a conversation that seems to flow like cold syrup. The whole scene is awkward and forced. As a writer, it is important to not sacrifice character for content. With that said, profanity should only be used in dialog if it fits the character. Don’t use it just to use it or you will sound like a child trying to be cool for the first time. The writer for Umbral has Rascal swearing, and it really does not fit the tone that has been set for her. This makes Johnston seem like the child trying to be cool.

Remember how it seemed like “the Umbral” was referred to as a place. Well on the last page of the book there is a full page drawing of a demonic looking monster, which looks like it was drawn on silly putty and stretched sideways, who states “the Umbral is already here.”  Now it seems “the Umbral” is a creature of some kind.  This is confusing. As a comic writer the idea is to draw people into your story with your first issue; not throw shit in their face.

Christopher Mitten’s artwork in this comic is horrible. I counted eight different sizes and shapes for Rascal’s nose. This is very inconsistent. Was he running late on his deadline? This could be a possibility, because I checked out is website at christophermitten.com to find that he does have some good work. None of it is inside this comic.  The worst panel is on page 11. The character named Borus has been killed, and the scene looks just silly. Borus’ head is supposed to be split open, but it looks like someone beaned him with red play-doh, and the pool of blood he is setting in does not look right.

This comic book has the phrase “a new dark fantasy from the creators of Wasteland” on the top of the cover. This leads me to believe that Wasteland is total crap as well.  At the very least Umbral does have an attractive cover.  You may now remove your boots and wash all of the shit off of them. Let this be a lesson to all that Image WILL publish just about anything.

Posted by The Hammond Comics Blog at 3:05 PM