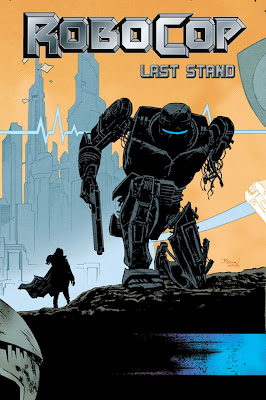 I’ve been waiting for this series ever since I caught wind of Boom Studios buying up the comic book rights to the Robocop franchise.  With the new RC movie coming out, I felt the need reconnect with an old friend.

I was eight when the first Robocop movie hit theaters.  Murph was one of my first glimpses into the world of science fiction……outside of Saturday morning cartoons.  That’s right, Robocop was my gateway drug.  Action figures……..had em.  Halloween costume…..had it (twice).  8 bit Nintendo game…..beat it.  Robocop on VHS cassette tape……wore it out.

To this day, I’d put Robocop in my top 20 favorite movies of all time.  The second and third ones were complete horse shit in my opinion.  Those movies killed the franchise almost to the point of no return.  Almost.  But wait, didn’t some guy who writes funny books write those crap-tastic examples of Hollywood gone wrong….way wrong?

So I heard that Frank Miller was attached to these eight issues, a major selling point as well.  Here comes Frank!  He’s here to repent for his sins, right his wrongs, and fix my damn Robocop.  Not true.  The key words I sadly overlooked were…….Frank Miller DID NOT write this comic.

There is nothing new here.  Nothing original and nothing worth my four bucks.  Steven Grant has taken an unused script that Miller wrote for Robocop 3 and adapted it for this eight issue run.  In my mind unused means unwanted because of the incredible suck valve.  Oh I know!  This script is way too damn awful for the big screen, so twenty years later Frank finally decides to take out his garbage and dump it in my comics. Sod off Frank!

This whole book just pisses me off.  The story or adaptations, or whatever it is, are bad.  The art seems rushed and just thrown together.  Seriously some of the panels are straight up asshole ugly.

I didn’t sign up for this!  Well, okay, actually it was on my pull list until about two minutes after I read the second issue.  Issue three just came out.  I’ve never read it, but I’m confident it’s horrible. I’m not even going to waste anyone’s time elaborating further on this canned meat.

Serve the public.  Protect the innocent.  Uphold the law.  Where were ya on that one Boom?  Where were ya?
Posted by The Hammond Comics Blog at 5:01 PM