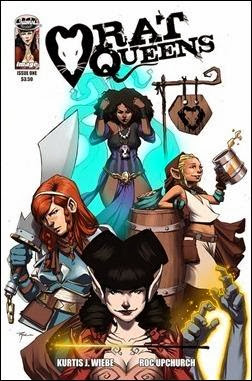 THIS IS A PUBLIC GEEK ANNOUNCEMENT! For my fellow role playing game geeks in the world, a jewel of a comic has been bestowed upon us from the creative mind of Kurtis J. Weibe, writer of Grim Leaper and Intrepids (both from Image). Rat Queens #1 is just what we love to see, not only in a first comic of an ongoing series, but also in an adventuring group series. This book is already sold out of its first printing, so the first one will be hard to find, but if you missed the first, you will not want to miss the second. WARNING! Rat Queens is both addictive and funny.

Role playing games allow one to create a colorful, multidimensional character with a group of others, bringing the character to life through group interaction. Weibe does the same with the characters he introduces in Rat Queens, and does it very effectively.  Imbedded in the first book is a nice pointy hook that is now lodged in my stomach and will require surgery to remove.

In the comic, Rat Queens is the name of an adventuring group of four gals, who are working for the town of Palisade for pay and gain. Betty, Hannah, Dee, and Violet have also been found terrorizing said town with their drinking and hijinks. Each of the likeable girls has a very distinct personality that is brought out very skillfully, but I am sure that the vast majority of the role playing and comic geeks are going to just fall in love with Betty (pictured below). She is the hook of the book in my opinion. She is a smidgen (basically a halfling, kender, or hobbit depending on your choice of vernacular) rogue with a clever wit, open sexuality, and a craving for candy and drugs.

John ‘Roc’ Upchurch has done a great job on designing and drawing each of the Rat Queens. Although his style throughout the comic felt a little haphazard and rushed at times, he does do a decent job depicting the action and developing emotion throughout. There are certain panels that  show more detailed work in the comic, and they are exquisitely drawn. Roc is newer to the comic book scene and has done work on Vescell, also from Image. His artwork is great, and in my opinion, he has a remarkable talent in drawing the female figure. More of his work can be viewed on his blog site at http://johnnyrocwell.blogspot.com. I think we will see a lot more from Roc, and he and Weibe have a nice creation in Rat Queens.

Roc Upchurch also created the cover of the comic, and he did a fine job of it. In the lower right hand side of the cover, there is a pair of gloved glowing hands that are reaching up toward Betty. What the hell are those doing there? They do not seem to belong to anyone in the comic. Are they trying to feel Betty up? I am not sure why these hands seem to bother me so much, but they do. Maybe I missed something or there is another meaning. If anyone has any explanation to offer, I would love to hear it.

With rich, lovable characters, Rat Queens has the feel of a comic that is going to be with us for the long run. As I stated earlier, the hook is in my stomach and pulling me along. I love it when this happens.
Posted by The Hammond Comics Blog at 6:59 PM