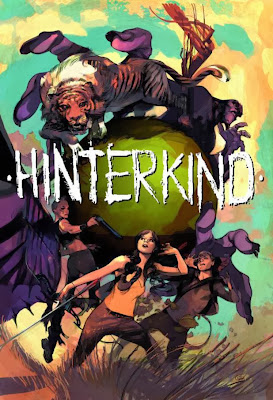 Vertigo, would it be possible to have my $2.99 and sales tax back for this comic? I would also like to have the 20 minutes of my life back, which was spent reading this comic. The cover looks good and attractive, and it appears to have the right stuff in it. The closest comparison would be to grab a tobacco-chewers spit bottle (let’s say a Coke bottle) and take a drink unexpectedly. Once you get a taste, you want to ralph and look for someone to knock out. That is basically the feeling I had with the first issue of Hinterkind.

Greg Tocchini did a fabulous job on the cover of the comic. The tiger/ lion creature, called a ligon in the story, is very captivating standing above the title and other characters. Tocchini makes great use of earthy tones to set the mood of the story and setting before the cover is opened. This book is nicely wrapped crap.
The story starts with a pair of friends hunting a zebra. After the kill they hike it back to their home, which looks like a small village in the middle of a large plantation cut out of the wilderness. The friends are named Angus and P. Other than having grown a tail, Angus is not much of a character. We are not even given the privilege of knowing for which P is a nickname. Meanwhile P’s only position in the story seems to be following people around like a five year old whining “I want to go. I want to go.”

At a few various points in the comic, the writer is caught proudly quoting something called “The First Book of Monday”. Wondering what this was, I took to the net and found nothing concerning such a title other than another review of this comic. My reaction is what the fuck is wrong with the writer. Suspense is not created with stupidity. Use a prologue or a caption at the beginning or the end of the book to explain to what you are referring. No one likes to be strung along like that. Provide some information for your readers to have some understanding. Suspense is built on anticipation not ignorance.

Overall the story does not have a consistent flow. This coupled with poor character development has made this a horrible start to a series. There is no substance for readers to gain interest and is equal to starring at a sheet of paper toweling (the ones with pictures).

The artwork on the first page is fairly nice, but as you turn the pages you get the feeling of going downhill. Francesco Trifogli is not very consistent in his work, which leaves a random feel to the character’s features. My feelings resemble the scene from Men in Black II where K, Tommy Lee Jones, is working at the post office and holds up a package while stating, “Here is an example of go home and try again.” There are several panels where the color has faded stripes throughout the image. At first I thought this was a shadow effect, but after a couple of panels of this, I realized it was not. The stripes are not a problem with the printing as the stripes do not traverse the page or even the whole panel. These are either a hurried or careless coloring job by my estimation.

Vertigo should be ashamed of allowing such a low quality product leave their presses. Meanwhile the writer should be embarrassed of this shit. Even an amateur writer knows how to start a story to build an audience, and the biggest step is character development. Mr. Edginton tried to get too much into one issue and should have focused on central characters to allow a connection with the readers. Regardless of his reasons or intensions, the first issue of Hinterkind is crap and a waste of time.
Posted by The Hammond Comics Blog at 10:50 PM