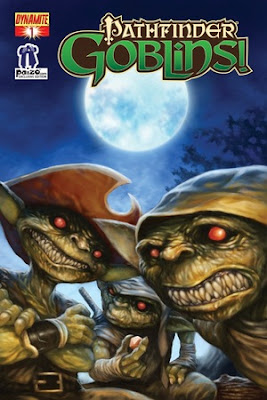 The Gobos have landed. Thank you Dynamite and thank you Paizo! I stopped reading the Pathfinder title in the middle of issue #6. It was horrible. It was one of those times when you keep reading a title just because of an attachment to the source material. I was blind but now I see just how awful you are. I had hoped you would grow up into something worthashit but you didn’t, you died in infancy. Shame.

Thankfully Goblins is nothing like its whore of a mother. Goblins is destined for a long and epically prosperous run of five issues. I know. I know. What the hell? That is way too short. If you’ve read the first issue then you’re probably saying that very thing at this very moment.to your favorite neighbor, Eggert. High five Eggert!

The book contains two shorts with both different styles and basic interpretation of what it means to be a goblin. I hope this is the format the book takes for the brief duration it stays remotely relevant. Seriously though, this book takes me back to The Thing’s Two-in-Ones. I love those books with the polka dotted art and all. One book. Two stories. Two writers. Equals Auto Win.

“The One-Eyed Goblin King “ is the first story in the book and just so happens to be my favorite of the two.

Adam Warren is one with the goblin. He crafted a great tale of adventure and self mutilation thru the eyes of a goblin. That fact alone has me nominating him as President of the World. The driving force of the story is a dark and powerful artifact. The artifact indeed turns out to be that last remaining eye of the Arch-lich Kalzaroth. The artifact was stolen by an adventuring party and on their way out of the underground the party get ambushed and cut down by our beloved goblins. It turns out the might War chief Guchkk knows how the Art-fak works. Guchkk decides the test the magic eye on the lowest on the henchmob totem pole…poor poor Urngle. Urngles buddies turn on him and pop out one of his eyes into which Guchkk deposits the magic eye. Urngle becomes a god like alpha gobo for about five seconds until the chief cuts Urngle’s head clean off. The hijinks continue with more eyes being popped out as the goblins turn on one another for the chance to be the one to claim the all powerful magic eye. The writing and art are both very well done on this one. Standing ovation. Loved it.

The second story “Prize Pupil “was good but not great. In fact after reading the first part of the issue I definitely felt the loss of momentum. This story is way less a satire and has more of a fable kind of vibe to it. To be totally honest, Shane White’s art totally killed this one for me. His facial expressions are possible the worst I’ve ever seen. Meh.

Another cool thing about this book and the main Pathfinder title are that snuggled way in back on the last couple pages are full of useful stuff for all you RPG fans….the magical items, blueprints, stats and profiles of most of the characters.

Posted by The Hammond Comics Blog at 6:39 PM