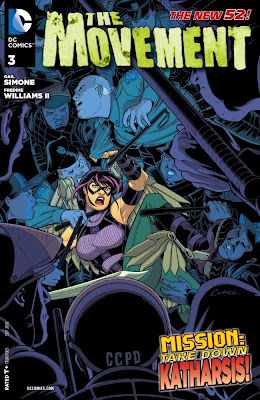 The flagship books of the New 52 have come up way short, prompting a backlash from fans that seems to never end no matter what the company does. Superman and Batman have taken a vicious beating at the hands of their new creative teams. All of the George Perez interviews that came out after his six issue run of Superman paint a picture of a company full of battling egos, a lack of a concrete editorial hierarchy, and way too many cooks in the kitchen, rewriting entire sections of Perez's Superman scripts. That pure Perez Superman that most fans were salivating for when the reboot was announced never even saw the light of day. Grant Morrison quickly turned Action Comics into one of the most confusing mainstream comic books of all time, rivaling Flashpoint in the convoluted plot department. Don't get me started on the Batman titles when they were first launched. I stopped collecting Detective Comics for the first time in my life after two months of the new Detective.

Admittedly there have been a lot of major disappointments in the DCU, but there have also been a lot of books that have strangely gone unnoticed and under appreciated. The Movement is one of these books. Topical, interesting, and full of richly developed characters, this title has great appeal for anyone who appreciated (I obsessed over) Simone's time on Batgirl.

Coral City is quickly becoming one of the most uniquely grounded settings in the DC lineup. The Movement, or Channel M, consists of the misfits from this broken urban metropolis battling a corrupt Government and championing the common man. While other critics have been despondent over a superhero title bringing the occupy movement into comics, sometimes due to their political leanings or the want of a purer escapism, I find this aspect of the book to be quite palatable to the plot and not out of place whatsoever. What worked for Alan Moore in V for Vendetta can work in the superhero universe as well in my opinion. The current arc is focused around locating the "Cornea Killer", but this seems to be a minor point in the story thus far. The Movement spends most of it's time battling the local police force and protecting the less fortunate inhabitants of Coral City.

The characters are what really makes this title pop. Mouse and Burden are two of my favorite superheroes (?) out right now. Both are weird, whimsical, and sometimes equally terrifying. Burden, a bi-polar superhero with an oppressive religious background that believes he is possessed by demons, never fails to entertain. And Mouse is the equivalent of a grimy pied piper on LSD. Right now those two characters alone are more interesting than anyone in the Suicide Squad. The rest of the team core: Virtue, Tremor (Simone Secret Six), Katharsis (Knightfall Batgirl), and Vengeance Moth are also not without their admirable qualities as well. Simone also adds a Gen 13 character, Rainmaker, into the plot as well. At this point it's hard to say how she will fit into the story, but I've got my money on her joining The Movement within the next three issues.

Instead of writing diatribe after diatribe on all of the comic forums, stop banging your head against the wall and pick up some of the solid books that are coming out of DC right now. The Movement, Wonder Woman, Flash, JLA, Nightwing, Aquaman, Animal Man, and All-Star Western all promise a fun read. Even the main titles are getting tweaked lately. After two issues the new Batman/Superman book seems solid. Superman and Action Comics both now seem to be heading the right direction as well. Fellow nerd and one of my Facebook friends MIguel recently compared the big two to "junk food", and I would tend to agree, but that's not necessarily a bad thing. Image is definitely where I'm spending my majority of time and money, but that doesn't mean I'm going to start chucking the McNuggets out the car window either.


Posted by The Hammond Comics Blog at 9:58 PM