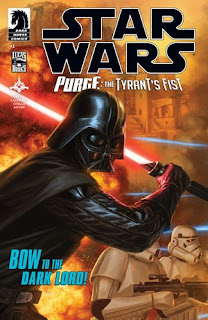 Legacy was the last time I got into a Star Wars comic, but this one intrigued me. Why? The period between Episodes 3 and 4 is an interesting time in the Star Wars universe. I want to get as much information as I possibly can on the subject, so I decided to roll the dice on a comic franchise that I had long ago put to rest. Star Wars was due anyway. Three shitty movies, some dismal comic books, and a sale to the Disney Company later, I figured these guys might have a hit on their hands.

I have always found that comic adaptations of sci-fi shows and movies seem to be lacking a little in the art department. The Tyrant's Fist is no exception. The covers were pedestrian and uninspired. The first panel of issue one literally made me cringe. The opening was an overhead view of Vader's "enforcer squad". The four square figures in the distance are reminiscent of the little square pegs that you put in the cars when playing The Game of Life. Sigh. OK, so how about the story?

A two issue series. I like that idea. The art of the well executed one shot is almost extinct, so the format was intriguing. Some series only need three issues to get the job done. Others try to cram 9 issues worth of story into 6. This series did a great job with it's space. The story flows well. The narrator could have been a little better, a little too human of a face on the Imperial peon for my liking. Some of the her dialogue didn't fit well either. At one point she said: "Check the official report for the grisly details." Not very Star Wars at all.

It did wrap up quite nicely however. The ending was solid, and not what one would normally find in the Star Wars universe...in a good way. Overall, if you can get over the art, this one is worth buying. There are flaws in the story as well, and they are minor compared to the payoff in the end. Details would equal spoilers, and since the plot is the redeeming factor in this tale, I don't want to ruin anything. I will leave it at this: This force is slightly above average in this one.
Posted by The Hammond Comics Blog at 4:40 AM