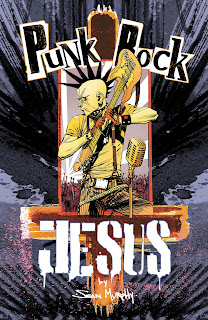 Punk Rock Jesus told me to go fuck myself. I never thought that I would get to use that phrase, or that it would make sense to people, but Sean Murphy has made my dream possible and for that I am thankful. If someone were to say to me that Punk Rock Jesus was the best series to come out last year, I couldn't really argue the point. There were comics that I like better, but this series was almost flawless. The art was dark and engaging, the story had well developed characters and it's commentary on organized religion was socially relevant. There were a few minor things that could have been changed for the better, and a few loose ends I felt myself pondering at the end of issue six, but these were some great comics, and from start to finish PRJ was solid throughout.

The subject matter itself isn't really that controversial in the comic world. The general demographic of comic readers tend to be against organized religion as a social norm. See Twitter. But the cloned second coming of Christ as the star of a new reality television show is some edgy stuff. The title alone tells one right away that this comic isn't going to be a love letter to the New Testament, but that was to be fully expected. The art was just brilliant on PRJ. Sean Murphy did a top shelf job on this one. The fundamentalist Christian fringe group seemed a little stereotypical, but the story was really well executed, a nice allegory of Christ in the modern world, sans divinity.

One of the things that really grinded my gears me were the presence of miracles in the book that went unanswered. The mother Gwen attempted to commit suicide and was saved by an Angel. When she woke after the incident there were hand prints on her shoulders resulting in a religious awakening. This leads her to join a fundamentalist Christian terrorist group? This part of the book made absolutely no sense to me at all. Both her miracle and Thomas's miracle went unexplained, but these occurrences were major life changing events for both characters. PRJ itself was a knock against organized religion, so why throw in legit angels. I was a bit disappointed. If I ever meet Sean Murphy at a con this will be the first thing I ask him while he's signing my mint condish copy of issue one. Yeah I know, hitting the man with a barrage of questions at a signing is super fanboy. Classy. But I'm willing to be that guy.

This is a must own series. If you didn't get in on the ground floor be sure to pick this one up in trade. All comics should be done this way. If they were, people would be way more into comics.Everyone wins. After PRJ, I will now be purchasing Sean Murphy comics on the reg in the future. The stuff he did on Joe the Barbarian and American Vampire was good, but PRJ is next level stuff. If I see his name on a future comic I must own that comic. Period. Sean Murphy is now a heavy hitter that can draw and write on par with the biggest names in the game. Hopefully his best work is yet to come.
Posted by The Hammond Comics Blog at 5:31 AM