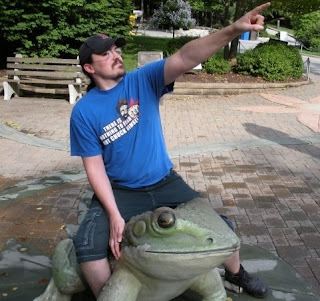 Born in the wilds of Central Wisconsin in the latter 1970s, young Will Dubbeld discovered at an early age the whimsy of a Friendly Neighborhood Spider-Man, the epic scale of The Avengers, and just how balls-out awesome Swamp Thing was.
Encouraged in all pursuits nerdy by his parents and extended family, young Will ravenously collected all manner of comics, fantasy and sci-fi memorabilia and successfully survived the lean years when it was not chic to be a nerd.

Will currently resides in Indiana with his concubine and 2.5 cats, day labors as a data processor, and by night pours over comic books and other arcane texts within the confines of his crumbling 19th century Italianate estate.

He shoots reproduction military artillery pieces for recreation, was an extra in a Sam Elliott movie, can start a fire with flint and steel, has met Stan Lee, and still thinks Star Wars is probably the greatest movie ever.

He may also be the Kwisatz Haderach.