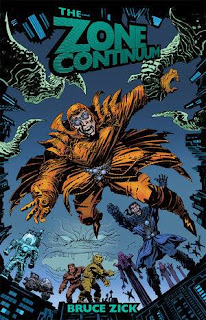 Good science fiction seems to be a rarity in the world of comics. There's an abundance of mediocre-to-okay sci-fi books, but very few that really stand out in a sea of uninspired newsprint. The Zone Continuum stands out, not only in the field of science fiction but in comics as a whole.

The Zone Continuum spins the tale of The Dar, a long-lived race that coexists with man, unbeknownst to the human race. Environmental hazards and man-made catastrophe creates 'Zones' in the electromagnetic field around the earth. They are invisible to man and will kill any Dar who passes between the barrier separating the zones. Talon is the Dar who leads Zone 27 and endeavors to find a way to breach the barrier between his Zone and the adjacent one containing his wife, Paris.
Forever separated by their respective zones, this true love kept apart in Shakespearean tragedy is not a new theme but has certainly not been done like this before.

Although much of the focus is Talon's quest to reunite with Paris, he also has to contend with a fellow Dar seeking to usurp his leadership. There's also some deeper themes of environmental responsibility, the destruction of mankind and a dash of vampirism, making The Zone Continuum one hell of a ride. The art and detailed world-building that Bruce Zick has done really steal the show here. It has a dash of the Pulps in the way Batman has a dash of the Pulps. It's all rooftops and brick facade and wrought-iron ladders, laboratories full of canisters bubbling with mysterious green fluid and slightly Lovecraftian beasts that attack from the aether of The Zone.

The book is somewhat retro-futuristic, not in a way that's not so much computers with touch screen capability but more so vacuum tubes and Giger counters.
It's not retro enough to be steampunk, it's not quite dieselpunk or gothic. Sort of a Decopunk, I suppose is my best description.
A world where you can almost see Roy Batty talking about the Tannhauser Gate on the next rooftop over. It would fit in Anton Furst's Gotham City skyline.

The art is phenomenal, mostly (but not entirely) because it reminded me of Mœbius' Airtight Garage, in a thematic sense at least. The grimy, Art Deco look was right at home with the Mister X comic or, on a base level, the Big O anime series.
But without the giant robots.

The Zone Continuum gives you a sense of alienation, juggling hope and despair, and by the end of it all you're unsure where the story ends up, because the balls are still in the air. Go buy this book, folks. It's got some crazy, new ideas and some jaw-droppingly amazing imagery. There are Kirby Devices ALL OVER this book, and the end of part one gives us the gift of Talon's djinni companion showing up in true, "Come with me if you want to live", fashion on a giant motorcycle that looks like it was designed by HR Giger.

I'll leave you with that mental picture, dear reader, because if that doesn't give you the ammunition to check out the comic, there's something amiss. Dark Horse is selling this tpb for $15.99 and if your local brick-and-mortar shop doesn't carry it, I'm sure they'd be more than happy to order it for you.
Posted by The Hammond Comics Blog at 6:21 PM