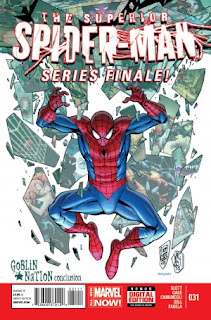 So yeah, here it is . . . in the immortal words of Jim Morrison, “This is the end . . . beautiful friend.” It’s been a great run, but like most things (I say most things because you always have to consider the Rolling Stones and their seemingly uncanny ability to continue living long after their bodily fluids have dried up), it has to end. Peter Parker has to be Spider-Man.

Any Spidey fan can tell you that Superior Spider-Man has been the most exciting thing to happen in the Spiderverse since . . . well . . . probably ever. Dan Slott and company did a really good job all around.

Don’t get me wrong, there were parts I hated too; I’ll get to that but all in all I felt it was worth buying the ticket and at the end of the day; that’s all that really matters. I’m sure I’ll forget a few but I figure I’ll hit on a few of the highlights from the series and go kinda light on the details from the final issue. I don’t want to spoil the goods for those of you who haven’t had the chance to read it yet.

Just after "Dying Wish Ended", issue one of Superior Spider-man hit shelves way back in January of 2013. Sixteen months is a pretty long run for any bi-monthly book these days, 31 issues and 2 annuals to be exact.

In the first couple issues we get to witness Otto defeat the Sinister Six and we also get to see that Peter is still “alive”, trapped in Octavius’ consciousness. Otto battles the Vulture at one point and puts a beating on him, ultimately ending with Vulture being blinded. Spidey then tracks down the escaped killer Massacre and proceeds to publicly execute him. The word gets out that Spider-Man is playing for keeps. These first few issues were probably my favorite issues of the entire series.

That’s when the thousands of Spidey bots hit the scene. Otto unleashes his homeland security spider spy came to NYC. I thought this was pretty ridiculous from panel one, but in the end they turned out to play a pretty pivotal roll in the final issues, and I admit maybe I was quick to judge.

Somewhere around issues 6 or 7, is when Otto beats the hell out of a couple of young pranksters called Jester and Screwball. This begins to draw the attention of the Avengers.

In the same time frame, Peter begins to “mind battle” Ock for control, but Ock defeats Peter. Octavius erases all of Peter’s memories, in theory ending him for good. I hated ghost Peter at first and, at the time, was glad they had finally made him disappear.

As if things weren’t crazy enough already, all of a sudden, we have Spider-Man blackmailing Jameson into giving him the Raft to use as his new headquarters, requiting an army of “soldiers for hire types” to be his “Spider-lings”, and last, but not least, full blown assaulting Shadowland, the Kingpin’s headquarters.

Spider-Man 2099 Miguel shows up on the scene. He’s just dropping into the past to save the future. It all makes sense at the end.

Enter: The Goblin King, the Tinkerer, the Goblin Knight, Cardiac, Menace Hobgoblin, Venom, Superior Venom, and Charlie getting injected with goblin formula, transforming her into Monster. It gets good . . . really good.

The facts are simple. If you haven’t read this series especially the final issue, buy the second printing or buy the trades. This is a must read, even for a non-Spider-Man kinda fellow.

Here’s to the disappointment The Amazing Spider-Man #1 is sure to be. Cheers.

Posted by The Hammond Comics Blog at 1:30 PM