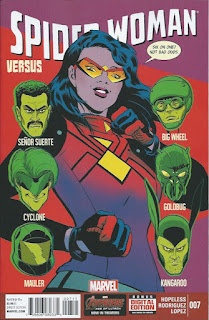 I have been enjoying the hell out of this title; I’d literally give every issue a thumbs up. Now, one could argue that my man crush on Spider-Man has somewhat biased my opinion towards his female spider-kin, and I’m sure that’s about right. No doubt my puberty-infested, angst-ridden younger self eagerly snatched handfuls of the early 80s Jessica Drew books . . . because . . . Spider-Man with boobies! The early 90s ushered in Vol. 2 with its amazing run of four issues and I was there. Mattie Franklin takes up the mantle in Vol 3 in the mid to late 90s and pretty much sealed the deal for me there. I don’t care how much my friends made fun of me, I stood behind Mattie then and I stand behind her now. Comics and I went our separate ways for a number of years about the time that run was coming to an end, so I don’t know those other gals that were after Mattie. I’m sure they were nice . . .

Yeah, I was super excited for the present day (vol. 5, by my count) incarnation of Spider-Woman.
Jessica Drew, in her own series again, has just recently left the Avengers in hopes of living a “normal” life.
Spoiler alert! That’s not going to happen.

The current story arc has She-Spidey teamed up with the gottdamn Porcupine! That’s right, I said the Porcupine. Fantastic! More then anything in comics I love D-list super villains. More specifically I love the D-listers who are so ridiculous that they refuse to go away, for example, the gottdamn Porcupine. Or how about the Kangaroo who’s endearing mug graces the cover of this very issue? The best team-up ever is investigating the disappearances of a large number of the families of super villains. Towards the end of this issue it’s revealed that these families are all living in some kind of beret-wearing militant feminist commune that is apparently run by some as of yet unknown dame named Cat. On the last page of the book Cat bursts through the wall to confront Spider-Woman, now when I first saw Cat referenced I immediately assumed we were talking about the Black Cat here, so you can imagine my surprise when Cat turns out to be an enraged psycho operating some sort of Caterpillar backhoe/super robot mech suit kinda thing . . . Yeah, it's intense but at least Porcupine is here to save the gottdamn day.

As for the spit and polish, the writing has been fresh and fun and the art has been fantastic. It’s to bad Marvel is about to jack up the MU and this and many other good books all in the name of their newest “mega event” . . . and that’s a shame