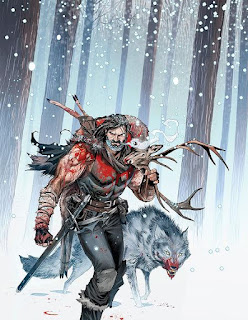 So I hear Grant Morrison is writing Santa Claus' origin story, which is absolutely insane if you stop and think about it. On the other hand, an equally logical response is, "well of course Wacky Grant is writing a Santa Claus origin story, that makes perfect sense."

So clearly I preordered it. My love/hate relationship with Grant Morrison compels me to try out almost everything Grant writes, as I have clearly failed a Will Save vs. his Chaos Magics.
That's clever on a couple levels, folks . . .

Dispel from your mind the vision of a jolly white-bearded fat man slinging toys and "ho ho ho-ing" appearing in this book. The Klaus of Grant Morrison's story is a steely-eyed, rugged wilderness warrior, all corded muscle and bearded machismo.
From the double page spread of Klaus overlooking a medieval walled city locked in a winter tundra to a scene duplicating the titular hero and his wolf companion (!) locked in mortal combat with a sinister looking reindeer, you're made to believe Santa is badass.

Klaus opens with our titular hero headed to the aforementioned walled city of Grimsvig to trade pelts and game. The opening scene is portrayed beautifully, a p.o.v. through the gates of Grimsvig depicting city life with a design reminiscent of a city in Fable II.
It's incredibly odd for me to make a video game reference, as I rarely play, but I really dug Fable II...

Klaus soon discovers the formerly friendly and progressive burg has fallen to ill times due to the oppressive reign of Lord Magnus, a stereotypical totalitarian sadistic ruler. Klaus finds his goods confiscated, Lord Magnus has forbidden children to have toys, and the tavern ale is watered down.
Adding injury to insult, our hero is beaten in the streets and ran out of town.

In an oblique way this is sounding very familiar...

We are soon treated to an uncomfortable family dinner with the sinister Lord Magnus, his horrible -terrible-no good-very bad bratchild Jonas, and the unnamed Mrs. Baron Magnus who seems to be either a hint of coldly sinister or the medieval equivalent to a 1950s housewife self-medicated on Mothers Little Helpers.

I haven't quite got a handle on Mrs. The Barons character yet...

Up to this point we've been treated to a fairly straightforward, if tongue-in-cheek, fantasy fairy tale book. The first words printed on the page are, "Once upon a time" for cryin' out loud.

But then Grant's mushrooms must've kicked in.

There Klaus sits, minding his own business, communing with nature and jamming out on a flute like so much Jethro Tull, when out of the woods come floating some psychedelic forest spirits.
A quartet of little guys that resemble disembodied Grey Aliens.
The Ghostbusters may have referred to them as "full torso, free-floating apparitions", if memory serves . . .

In any case, these big headed forest spirit/aliens zap Klaus with some trippy mojo and the comic explodes into a surreal Technicolor sequence showing Klaus madly crafting toys in his own personal trip factory. Finding the fruits of his labor in the morning, Klaus wonders, "What am I supposed to do now?"

I'm not sure, but I bet it involves Klaus bounding from rooftop to rooftop like so much Christmas Batman delivering contraband toys to the children of Grimsvig.
Did I mention the comic takes place during the Yuletide season...?
So this book is very much like that old stop-motion Christmas special where Santa Claus was a kickass freedom fighter in his younger days. "Santa Claus is Coming to Town" was the special if memory serves, but in any case Mr. Morrison is giving the program a healthy nod here.

These are the Grant Morrison stories that really work in my opinion. Flex Mentallo, We3, Happy! and the like really capture the authors eclectic style without getting too pretentious (Doom Patrol, Invisibles, lookin' at you...) so this'll be a book I stick with, if nothing else to see if Lord Magnus learns the true meaning of Christmas or if Klaus dispenses some Yuletide justice on his ass with extreme prejudice.
Also, I really want to find out if the forest spirits just peripherally resemble Grey Aliens or if Santa Claus came about due to extraterrestrial mind control.

Because with Grant Morrison either theory is just as plausible as the other.

Between the superior script and great pencils, I'm recommending Klaus to everyone. Mora's art alone is with the price of admission due to the amazing background work and nearly Terry Moore-caliber attention to detail and expression. The colors are phenomenal atop Mora's line work and although the snow fallen winter is the story's backdrop there's a superior use of blues and earth tones with occasional slashes of bright color. Fantastic work.

Klaus is a $3.99 floppy available from Boom! Studios at your local comic shop. Don't wait for the trade, folks. If you don't buy the singles, there may not be a trade.

Merry (early) Christmas!
Happy Hanukkah, Kwazy Kwanzaa, etc. etc. and so on and so forth.

Posted by The Hammond Comics Blog at 6:27 AM