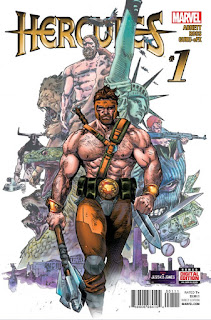 Marvel is pretty self aware of where their flagship titles fall, and so apparently is writer Dan Abnett. Hercules is now an immortal with an all-new identity crisis, attempting to find a way to be useful in a modern world that has forgotten the heroes and villains of mythology. It is an interesting take on the superhero, but not a new one. Silver Surfer was well known for dealing in self-reflective, philosophical meanderings, and Geoff Johns recently wrote some issues of Aquaman that poked fun at his B-List status.

Personally, my taste in comics would prefer the high fantasy approach, but I may be the only one I know still reading Conan the Barbarian, so there’s that. Take comfort in knowing that Peter Jackson is still doing his best to ruin the genre for everyone, and Thor in its current format is completely unrecognizable from the Thor we all used to know and love. It could still be the mainstream answer we’re looking for if the trend of re-launching entire universes continues to sell books, but there are a lot of “What ifs” and speculation in that scenario. Dark Horse is the only publisher with a pure contribution, doing a great job with the Conan series despite lack of readership. It should be able to whet your appetite a bit until the inevitable great resurgence. Perchance to dream, anyway. Current comic book fantasy genre prognosis: dismal.


The blending of smartphones and mythology is the current strategy to get Hercules past twelve issues in the modern market. It will not survive eight. This is not due to weak writing or art, but more the self-imposed restrictions placed on the title by the creative team. While a modern re-imagining of a classic character can Lazarus the shit out of a series, I don’t see how tongue-in-cheek jokes about WIFI and blogging are taking things to the next level. Every mythological element was completely shoe-horned into the plot — an afterthought in a book that should be the focus.

The second issue of Hercules was actually much more enjoyable than the very strong first issue in many respects. The theme of personal redemption after making tabloid covers for all of the wrong reasons is engaging, and a nice throwback to the Bob Layton era. The jokes work, but in order to maintain an extended run it’s going to take something greater than a comedic Dinner with Andre starring Hercules the immortal demigod. To really make this a must read, more than a soupcon of fantasy elements are needed in order to make a sustainable, and long-lived run.

After establishing the setting and characters there is a chance that future arcs will become more substantive and appealing to the core audience. In a Marvel universe churning out deathless Avengers and X-Men books, a great Hercules title could hit the sweet spot for burnt out old heads such as myself. At this point in my comic book reading career, I’m not sure if I’m the voice of reason, or a senile, shirtless geriatric wearing stained trousers and suspenders, shooing kids off of my lawn.

I enjoyed this book despite the pessimistic overtones of this doom and gloom review. Luke Ross puts forth art that you would expect from the largest publisher in American comics. No ground is being broken here, but it is not the work of an amateur, and far from a distraction. Hercules is a clever, well crafted read that does not rely on gimmicks. The irreverence is the most appealing part as of yet, but hopefully Dan Abnett can channel some Resurrection Man (underrated!) and give us what we really need, something other than the status quo from a publisher that just issued a press release trumpeting a new mega event called Civil War 2. I guess taking an extra five minutes to come up with a catchy title to slap on their tired, recycled content was too taxing. Let me be the first one to piss in their Cheerios. Have a well deserved ‘fuck you’ in advance from me, Marvel.
Posted by The Hammond Comics Blog at 6:29 AM