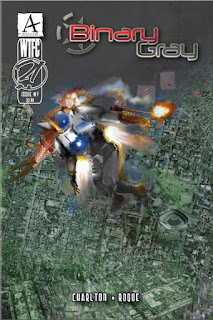 This issue of Binary Gray resembles the calmness of the eye of a hurricane. Issue 6 delivered an action packed issue with all of the grand excitement we all love to see from super hero battles. Issue 7, “Take Me Home”, presents us with the fallout of the events up to this point and also sets us up for another big clash with the Agency, the organization that is after Alex Gray. For the entire series, I have had great things to say about each issue, and this one is no exception.

The cover of Binary Gray #7 is another winner from David H. The cover shows the fight between Dash, from the group Virtue, and Optimo, a new villain, fighting high above the city. The image looks like it uses a photo of an aerial view of a city as the background, and the characters are drawn or painted onto the background. The look on Dash’s face is what really sets the image off, and my eyes were just drawn to it.

“Take Me Home” continues the saga of Alex Gray. In the aftermath of the battle with the Agency, Alex Gray is feeling a lot of guilt over the injuries suffered by Chris, the retired Cross. His guilt leads him to leave the Virtue’s headquarters against popular opinion while the rest of the group splits in two other tangents. Meanwhile we get another piece of the puzzle of Alex’s past.

Now I have read many comic books where an issue has left me with a huge cliffhanger, and usually the next issue resolves it. Charlton has done something totally surprising with this technique; he has extended it with issue 7. In essence, he left us standing on a cliff then handed us beer goggles. It’s great. Binary Gray #8 is going to be huge by my prediction, and I can’t wait to see what’s in store for our hero.

I have become a fan of Chris Charlton’s writing over the last year. His writing and editing is remarkable, but there is a problem with Binary Gray #7. If this is the first issue of the series someone reads, they are going to have a problem with knowing the names of two of the major characters. The Moth is not identified at all and has several panels of dialog. The Cross is only identified with his real first name, Ken. This does not affect the story at all but could leave a new reader wondering.

From the start of the series, the artwork of Binary Gray has been really good. Rowel Roque and Antonie Wilson have been a great combination. In this issue, they seem to be out of sync. My first read of the issue left me completely feeling that Roque was losing his touch. After my second read I compared issue 7 to the last two issues and found that the coloring was not as intricate. The shading and shadowing quality has faltered in this issue. My hope is this is just a fluke.

Binary Gray has been one of my favorite comics for the last year, and I feel very fortunate to be allowed the opportunities to preview the issues. Binary Gray #7 is due for release on July 30th. The issues will be available for $3.99 (hard copy) and $0.99 (digital) at Assailant Comics’ website. Some great news is the release of issue 8 is just around the corner. I have said this before and I am saying it again, if you enjoy reading super hero comics, you should give this series a try. It is a great read and an original idea. You can get FREE digital copies of issues 1 and 2 directly from Assailant Comics right here. Everyone loves free stuff, so go get yours.
Posted by The Hammond Comics Blog at 1:30 PM