No time for love, Dr. Strange

My love of comics was inherited from my much older brother. Being 15 years my elder and a social outcast, this meant two things: we had plenty in common, and he had an old light blue Oldsmobile that made plenty of visits to the comic shop. Once arriving there was plenty left of his part-time supermarket paycheck to get a nod from the man working behind the counter. Those were some nice memories of simpler times. 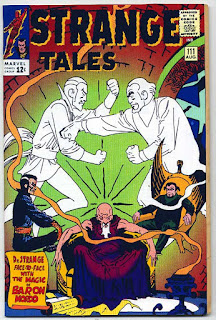 Although the Sorcerer Supreme can no longer boast a monthly title of his own, there has been plenty of talk recently about his upcoming feature film which could prove to be pretty exciting. Marvel should’ve chosen to revisit the old Asian stereotypes of Ditko and Lee’s initial Strange Tales. Those first four issues were the best hands down. There are undoubtedly plenty of people who would disagree, but I would argue: “What’s better than ancient Tibetan high fantasy and the dark arts?”
Boom. Argument won. There’s nothing better.

While most covet Strange Tales #110, give me #111. I can easily afford an 8.5 CGC #111, and instead of getting Johnny Storm confounded by mirrors on the cover, I can see him battling Asbestos Man, someone I am sure my brother faced at some point being a child of the 70s and 80s.
I heard they used it to make soup after they pulled it from the public school walls.

Marvel should’ve taken a moment to do something different with the casting, and methinks they need to kick Kahn to the curb, although we all know that this will never happen.
Nothing against Cumberbatch, though.
He’s pretty good for a white guy.
My point is this: Tibet, Greenwich Village, and black magic is a guaranteed box office hit. It would sure make me happy, anyway. Marvel street cred is at an all time high after Guardians of Galaxy, so I will buy a ticket hoping that it is incredible. At the very least it will give me a license to bitch about it with impunity. I can already see the fanboys on Twitter picking nits right now. I think we can all agree that the worst thing that can happen is a visit from the Ghost of the Last Samurai.
There is a reason that I am not the CEO of a blue chip company. In addition to being dangerously unqualified, it would’ve been awesome to watch the internet explode after saying that Marvel Studios has just cast Tom Cruise as the next Dr. Strange in an otherwise all Asian production. That would definitely be good for a grin.
Posted by The Hammond Comics Blog at 10:21 AM