Written and illustrated by Walter Simonson
Review: Will Dubbeld 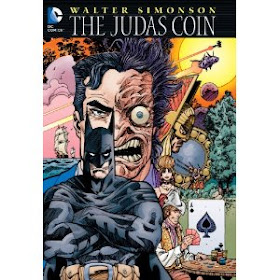 Loathe though I am to admit it, I find myself enjoying DC comics more and more these days. I still despise their policy of rebooting the entire line every so often (5 times by my count. 3 crises, a Zero Hour, and a Flashpoint, kids). Imagine my chagrin as a youth trying to untangle DC continuity with only my wits and a stack of Who's Who of the DC Universe at my disposal.

It was not easy, but at the end of the day I knew my Earth-1 from my Earth-2 and my Calendar Man from my Calculator. Since then I've suffered through their Crises Infinite and Final, and have come to realize that the only constant in the DC Universe is Power Girl's bra size.
But certainly not her origin...

So once again, loath as I am to admit it, despite DCs jacked up history and editorial foibles, I'm enjoying National Periodicals a bit more than Timely Comics. I've tried to care about the mega-events and crossovers, but I just could give a Bamf less about AvX, Spider-Man's sidekick, or how many Cosmic Cubes are in play right now.
I think it's like three.
(caveat: all of the above is still better than Before Watchmen)

So this brings us, in an oblique fashion, to Walt Simonson's The Judas Coin. The basic plot follows one of the pieces of silver that was used to pay Judas Iscariot through history from Roman times to the far-flung future of the DCU. I'm going to dispense with an impromptu history/theology lesson and surmise that everyone reading knows the tale of Judas Iscariot, Jesus of Nazareth, and thirty pieces of silver. If any of you are ignorant of this story due to a neglected religious or historical education feel free to take a break and read up on the subject. I'll be here.

Back? Okay, so The Judas Coin starts off with a brief account of the story of Judas and follows up with six vignettes in different periods of history and six different characters gleaned from DCs library. All of the characters come into some sort of contact with the titular Judas Coin, and in various forms of Monkey's Paw-like plot twists, ill-fortune and tragedy befall them or those around them. Brief synopses are as follows:

The first tale takes place in Roman-occupied Germania and stars the Golden Gladiator, a character I was wholly unaware of. He was evidently a star in the Brave and the Bold comic from the 50s. Anywho, the Golden Gladiator runs afoul of Germanian rebels intending to assassinate Emperor Vespasian and through happenstance encounters his true love, long since lost.

One of my favorites was the fourth story. It featured Bat Lash, DC Comics favorite roguish cowboy and star of perennial favorites All-Star Western Cowboy Shoot-em-up Two Gun Comics!
Or something of the sort.
Bat gets himself into all sorts of trouble involving the trifecta of drinkin', gamblin', an' whorin' that seems to be omnipresent in fine tales of the Old West everywhere.

Story number five stars some character called The Batman, and he tangles with some other guy called Two Face who's trying to steal the Judas Coin from a museum. Fairly formula, but it strikes a familiar chord and manages to feel pleasantly different at the same time.

The sixth and final story takes place in 2087 AD and stars Starker, the Manhunter of 2070. Starker is a space bounty hunter and we find him Cowboy Bebopping around the galaxy after two green women that would make Captain Kirk envious and their stolen cargo of ancient coins.
One guess as to which coin is amongst the booty.
A particularly good bit in this story involves a telepath who gets a bit of a shock when he handles the Judas Coin, but the ending of this vignette is by far the best and even gave me pause as I read it. Well played indeed, Mr. Simonson.

I liked this book a great deal. Simonson was able to craft entertaining and at times thought provoking mini-stories within the context of an overlapping central driving force, the coin. With the exception of Batman, this is accomplished using archaic and seldom seen or heard of characters. This could turn off some readers, but I loved it and they can lure enough people in by displaying the Dark Knight prominently on the cover.

Although the book is masterfully and entertainingly written, I found the highlight to be the art. Simonson illustrated each story in a slightly different style, making it look unique without deviating from his distinct method. The Golden Gladiator story resembled the Prince Valiant newspaper strip and the Viking Prince story looked like it was ripped from one of Simonson's old Thor comics. Marvel's god of thunder would have looked right at home amongst the panels, and the Viking Prince's longship is a fantasy/steampunk creation reminiscent of Simonson's Asgard. The Captain Fear and Bat Lash stories reminded me of the Western and Adventure books that Dell Comics used to produce, and the Manhunter story was drawn to look like a Japanese Manga or Korean Manhua. The Batman story stood out as the only black and white entry in the book, and the layout was panoramic (for lack of better term), requiring you to turn the book sideways in order to read it. Which I found slightly agitating...

The Judas Coin is a 96 page hardcover with dust jacket, brilliantly written, illustrated and colored, but I'm afraid the 22.99 price tag that accompanies it will discourage some potential readers. Hopefully the book gets a more modestly priced tpb in the future. In any case, I would highly recommend this book to anyone suffering from event fatigue, but still skittish about straying too far from the Big Two in their purchases. I also would recommend the book for fans of the Golden Gladiator or the Viking Prince, of which I'm sure there are one or two of in the world.
The Hammond Comics Blog at 8:38 PM
Share