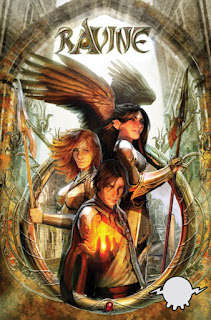 I'd like to preface the piece by thanking Stjepan and Ron for the opportunity to take a look at Ravine prior to its street date. A week or so ago Ron was asking for volunteers via Twitter to preview and review the book, and soon the Hammond Comics Blog was the proud owner of an advance digital copy.

It dawned on me that Ron had written some of the first Silver Surfer and Green Lantern books I'd read, years ago, and really cemented my respect for those characters. I still look back fondly on Emerald Twilight and The Herald Ordeal...

I was admittedly, and unfortunately, less familiar with Stjepans work, having caught some of his art for Darkness and Witchblade I was impressed, but not following those particular titles at the time. His art would very soon blow me away, however.

Ravine is fantasy epic, telling the tale of a land in conflict and the unlikely heroes that must take up arms against heavy odds and oppose primordial evil and villainy. Themes such as these have been present in myth and fantasy storytelling from Jason and the Argonauts to Star Wars (the good movies, you guys know which ones...) and are artfully applied here.

The books prologue begins with an epic battle betwixt two armies and sets the stage for the story to come. Nebezial Asheri, a fallen king reborn as a monster after the death of his queen, leads an army against his daughter and her fiancée Azriel. Asheri's daughter is slain in the conflict and he vows to bring her and his queen back to life. Desperate, world-shaking spells are cast and cleaves a ravine in the battlefield for which the comic is named.

Flash forward to present day and a man named Stein who's on that tried and true adventure to a dragon lair and untold wealth. Intertwined with Stein's tale is segments detailing a young dragon rider named Lynn and the tribulations of the kingdoms beset by rampaging dragons and unknown foes bringing what very likely is the tide of war.

Much sword and sorcery abound, with a dash of political intrigue reminiscent of Game of Thrones. The book lets you in on the history and myth of the world without cramming exposition down your throat, which was a pleasant change from a lot of comics brimming with thought balloons and block text force feeding you information. One bit of history was told via flashback, another through the pages of a history book, and nuances like these enhance the immersive experience for the reader. You can really tell that this was a labor of love for the authors and their efforts were not wasted. The writing is not as dense or as heavy-handed as Tolkien, but is just as proficient at world building and character development with fewer pages to work with. Fans of IDWs dearly departed Dungeons and Dragons comic will appreciate Ravine, albeit it's a more serious book. Despite that, you'll probably still get a twitch to grab your 20-sided dice and slay monsters after reading.

One of the biggest surprises of the book was the size. I didn't do any homework beforehand and expected Ravine to be a 32 page monthly book. Imagine my surprise at receiving a 163 page PDF! As the book sucked me in, imagine my further surprise as the bottom of page 130 bid me adieu with "continued..."

I'd gone from thinking Ravine was a monthly book, to thinking it was a self contained graphic novel, to thinking Ron Marz and Stjepan Šejić had played a cruel trick on me.

The last 30 pages are brilliant, I was pleased to discover. Comprising of appendices, Ravine ends with informative glossaries, a cast of characters and who's who biographies, a prose bit, treatises on dragons and magic, and a small gazetteer of one of the cities. I think these detailed appendices may have been one of my favorite parts of the book due to my love of flavor text.

Lavish is not a term I usually throw around, but this book is lavishly illustrated. From the crackling of spells, highly detailed weapons and armor, slavering hordes of aberrant Lovecraftian dragons, to a many-eyed god that lives under a mountain, straight out of R.E. Howard, every page of this book jumps out at you. There were even a few half- page pieces and two-page spreads that very nearly made me "squee!" with delight.

The layout was excellent, albeit frustrating to read in digital format. This is more a personal preference however, as I would rather read physical print than scroll through an Adobe file and I'll likely buy a copy of Ravine once released to John Q.

It's rare to find a really good fantasy comic on the market these days, but Ravine may soon change that. The Dungeons and Dragons comic was a bit too cheeky for purists, Battlechasers too juvenile, Tellos too tragically short-lived, and the disinterest in the genre has driven even the Pinis to self-produced webcomics. What Stjepan Šejić (am I pronouncing that right?) and Ron Marz have created has the potential to be a game changer for fantasy comics and, although it may not be for the capes and tights crowd, I'd recommend it to any reader.

Ravine, Vol 1, is due out on February 27th from Image Comics for the affordable price of $14.99 USD.


*price and release date taken from the Image Comics website
Posted by The Hammond Comics Blog at 5:03 PM